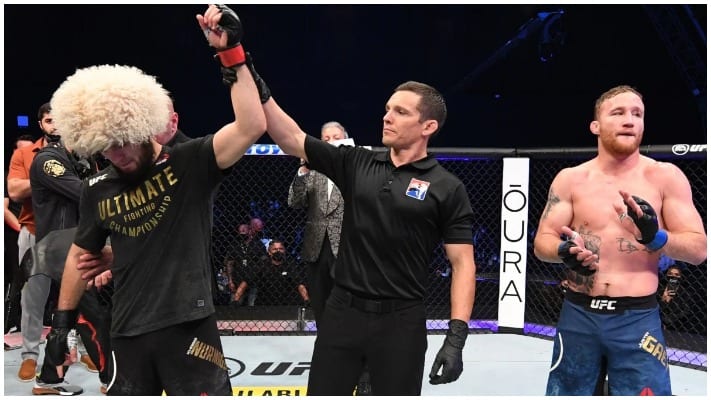 UFC lightweight champion Khabib Nurmagomedov has shockingly stated his belief that former interim titleholder Justin Gaethje “gave up” when they clashed to unify the division in October.

‘The Eagle’ entered the Octagon for what appears to be the final time at UFC 254. Nurmagomedov survived some early leg attacks before dragging the fight to the mat. ‘The Highlight’ showed next no nothing off his back and was quickly choked out by the undefeated Russian.

During a recent interview with ACA fighter Magomed Ismailov, Nurmagomedov stated that although it may not be apparent on TV it was clear to him that Gaethje “gave up” in the fight.

“You may not see this, but I felt it: He gave up,” Nurmagomedov said. “I mean, his will was broken. He gave up mentally. I don’t think that I won this fight physically, but rather mentally.” (Transcribed by MMA Mania)

Since the fight Nurmagomedov has announced his retirement from the sport. UFC president Dana White is dead set on convincing one of his biggest draws to return but has so far been unsuccessful.

Gaethje appears to still be in the lightweight mix despite the defeat. The former interim champ has been calling out a whole host of fighters but is yet to set a date for his next bout.

Do you think Justin Gaethje “gave up” as Khabib Nurmagomedov claims?