LowKickMMA.com
Home UFC News Kevin Holland Edges Out Darren Stewart On The Scorecards After Three Round... 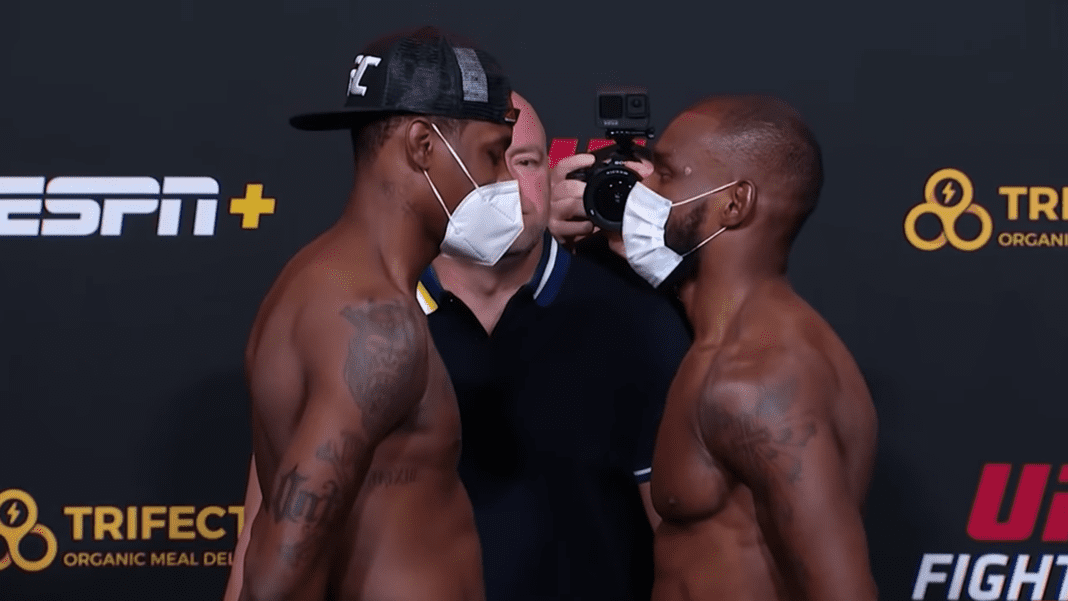 Opening the main card at UFC Fight Night: Covington vs Woodley we have a middleweight clash between Kevin Holland and Darren Stewart.

Round 1: The pair open the fight with a touch of gloves. Holland appears to put pressure on early coming forward before a land from Stewart backs him up. The pair clinch in the center of the cage, Holland lands knees before the two end up against the cage. Still clinch Stewart lands an unintentional low blow that puts a temporary halt to the action. Action back on, Holland throws a low kick. Stewart returns with one of his own. Holland lands a slap off a low kick. The pair continue to trade kicks. The two exchange in the pocket with Holland being caught and stunned. The pair continue to trade back and forth at close range before clinching. The pair exchange body shots before Holland separates. back in the center of the octagon Holland rushes in and lands a combination on Stewart. Holland lands another combination as Stewart closes the range. Stewart shoots a takedown on Holland, however, the pair end up clinched against the cage with Holland reversing the position. Holland separates and throws a high kick before the bell closes the round.

See also  Francis Ngannou: Ciryl Gane Is A Good Fight But Not On Level Of Jon Jones

Round 2: Holland opens the round with a low kick. Stewart catches a kick and lands a takedown before getting straight back up and out of his guard. As Holland waits for a stand up Stewart lands leg kicks. The pair continue exchanging low kicks on the feet. Holland lands a heavy counter one – two followed by a flying knee. Stewart lands a heavy jab. Holland pressures Stewart to the cage with a combination. Holland shoots in for a takedown which sees Stewart lock up a guillotine. Stewart gives up on the submission returning to the feet. The pair exchange jabs. Holland pushes Stewart back with a front kick. The pair clinch on the cage again landing body shots to close the round.

Round 3: Holland lands a heavy right hook to open the round. Stewart lands a takedown off a kick, however, Holland gets right back to his feet. Stewart keeps committed landing the takedown once again. Holland stands up which sees Stewart take his back. Holland rolls for a kimura which allows a scramble for Holland to return to his feet. The pair return to the center exchanging jabs on the feet. The pair clinch on the cage once again. Stewart lands a heavy elbow. Stewart secures another takedown. He begins landing elbows on the ground. Holland covers up to reduce some damage from the ground strikes. Stewart finishes the round on top landing ground strikes.