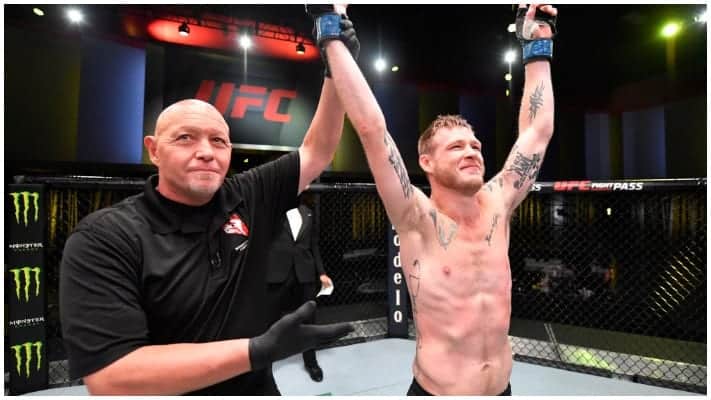 UFC featherweight Kevin Croom says nothing has changed after USADA revealed it will no longer punish fighters for testing positive for marijuana.

Croom stepped up on one day’s notice to face Roosevelt Roberts in September. He walked away with a 31-second submission win and a $50,000 “Performance of the Night” bonus.

However, “The Hard-Hitting Hillbilly” was subsequently flagged for the presence of marijuana in a pre-fight drug screen. Croom was fined, served a four-and-a-half-month suspension, and had his win overturned.

In an interview with LowKickMMA, Croom was upbeat and insisted that no-one could take away what he achieved in his UFC debut.

“They can do whatever they want,” Croom said. “Everybody saw me win, it was on ESPN. I got paid like I won. My confidence has changed. Like, no-contest? We all saw me drop him and choke him out. Whatever! I won, that’s all semantics.

“I quit smoking a few weeks ago so this won’t happen again,” Croom added. “I took the fight on 36 hours’ notice. There was nothing I could do. I told them, ‘hey I was smoking’. It is what it is and it ain’t changing sh*t.”

Earlier this month the United States Anti-Doping Agency in conjunction with the Ultimate Fighting Championship, released a statement that confirmed a positive test for marijuana will no longer result in an anti-doping violation.

Croom doesn’t think this change will have any real impact until the commissions get on board.

“It doesn’t matter,” Croom said about USADA’s new marijuana policy. “At all, because USADA have never had a problem with weed. I wasn’t in trouble with USADA or the UFC. I told them and they were like, ‘yeah no problem. You took a fight on 36 hours notice you’re fine’.

Do you agree with Kevin Croom? Will USADA’s new marijuana policy have no impact unless the commissions get on board?