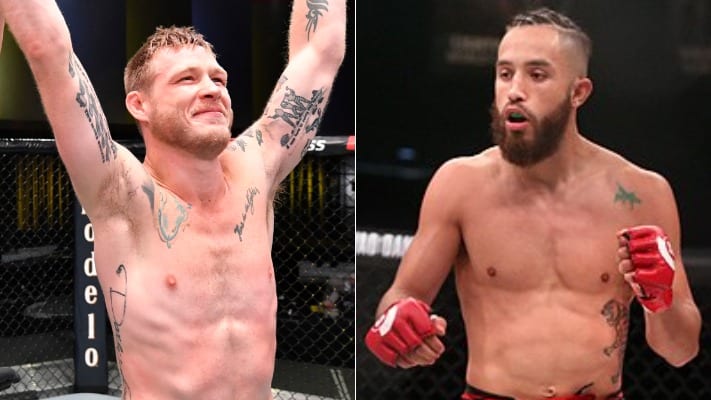 Coming off a big first-round submission victory in September, it appears Kevin Croom is going to have to wait a bit before he can have his next fight.

The UFC lightweight stepped up on one day’s notice to face Roosevelt Roberts. Croom walked away with a 31-second submission win and a $50,000 “Performance of the Night” bonus. However, “The Hard-Hitting Hillbilly” was subsequently flagged for the presence of marijuana in a pre-fight drug screen. During the Nevada Athletic Commission’s monthly meeting – which was held virtually due to the COVID-19 pandemic – Croom reached an agreement with the NAC which included a reduced $1,800 fine and a four-and-a-half month suspension, which is set to expire on January 26, 2021. He also agreed to pay prosecution fees totaling $145.36, per MMA Junkie.

Dana White‘s Contenders Series competitor Jose Flores also received a four-and-a-half month suspension for marijuana. Flores faced Jordan Leavitt in the first fight of the series fourth season. Flores was submitted in the first round of a performance that earned Leavitt a UFC contract. His suspension will come to an end December 4. He accepted a reduced fine of $750 and $145.36 in prosecution fees.

Heavyweight Chad Johnson, who saw his DWCS 29 opponent Josh Parisian receive a UFC contract after knocking him out in the first round, was issued a nine-month suspension for a banned amphetamine. He will now have to wait until May 18 2021 to fight again. He was fined $750 and must pay $145.36 in prosecution fees.

Also of note, UFC welterweight Niko Price had his suspension extended after testing positive for carboxy THC, a banned cannabinoid. The positive test came after his September 19 clash against Donald Cerrone, which saw the fight end in a majority draw. the issue is expected to be resolved in December.

Lastly, middleweight Joe Pyfer, who competed on the August 11 edition of the series, was granted a continuance to a later date after testing positive for modulator metabolites. The DWCS 28 fight saw Pyfer have his arm broken on a slam by Dustin Stoltzfus, who would walk away with a UFC contract.

Do you think Kevin Croom and other fighters should be suspended for marijuana use? Let us know!