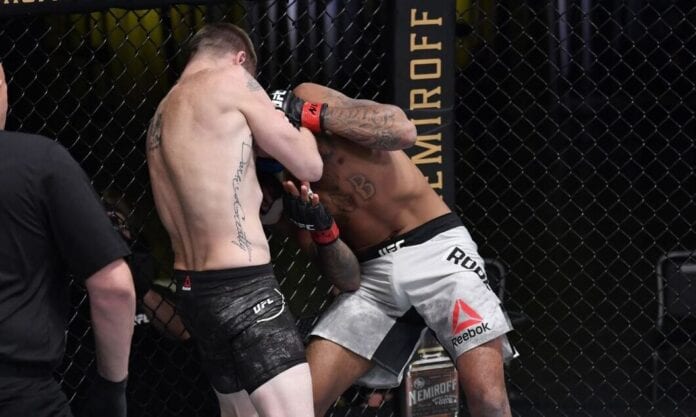 UFC debutante Kevin Croom just picked up the biggest win of his mixed martial arts career this past Saturday at UFC Vegas 10, as he defeated the ultra talented Roosevelt Roberts.

Not only did he defeat Roberts, but he caught him with a vicious left hook that dropped him, and jumped right on the guillotine choke to get the finish at just 31 seconds of round one. Roberts isn’t the most established fighter out there, but he’s a prodigy, and this 33-year-old ran right through him.

Croom was interviewed by Jordan Ellis of LowKickMMA following his impressive victory, and had the following to say about it:

Croom stated he’s been at it for 13 years, and he was asked how much better it is after working toward this for that long:

Croom was then told his performance was the fastest finish in UFC lightweight history from a debuting fighter, and was asked to express how he felt about that:

“Yeah man that’s amazing, especially ’cause I don’t fight (at) lightweight, you know? I mean, I plan on eventually going down to (1)35 (lbs) so, I plan on having wins in three weight classes, easily.””

He was then asked if he thought the situation of fighting Roberts on incredibly short notice was not ideal for him:

“No man I mean I never even thought that it was not ideal at all. I give no fucks. I didn’t even find out who I was fighting until I got to the airport, like, you know what I mean?

“I found out, A I gotta do all this stuff, do medicals, I had five minutes to pack a bag, grab my mouthpiece, run to the airport, (I) barely made it. I got to the airport like 30 minutes before I had to leave. So like, (I) finally got there, found my coach, sat down, just like, ‘who am I fighting?’

Croom came into this fight with an extensive, successful amateur career, and a 21-12 professional record, as he improved it to 22-12 this weekend. He’s a finisher too, as he showed us all on Saturday, with eleven of his wins coming via submission and six coming via knockout.

He was the biggest underdog on the entire card, Roberts was a -440 favorite, and Croom passed with flying colors. It’ll be interesting to see where he goes from here.

His life was changed with this win, as he was awarded the $50,000 Performance of the Night bonus. He only had $64 in his bank account prior to this fight. That’s truly a beautiful thing.

Assuming his next fight takes place at 145 lbs, who would you like to see Kevin Croom face next?