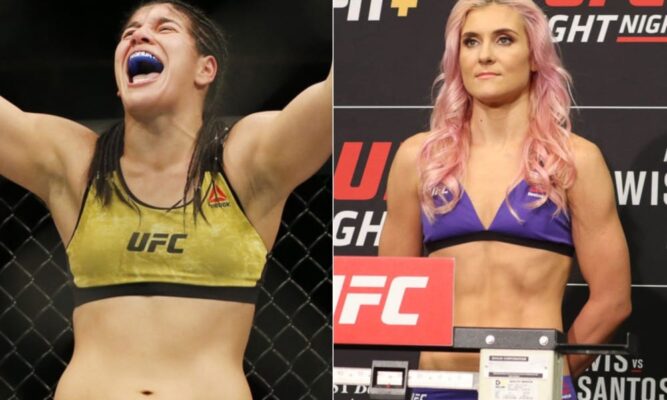 It looks like the UFC are still eager to see Ketlen Vieira and Yana Kunitskaya throw down. With the two bantamweights scheduled to fight for the third time at UFC fight night Feb. 20. An event that still awaits a location.

Originally scheduled to fight back in August, the bantamweight match up between 7th ranked Ketlen Vieira and 8th ranked Yana Kunitskaya has been re-booked and will now take place on February 20th. With Kunitskaya announcing the bout via Instagram.

Vieira was forced to withdraw from her UFC Fight Night 174 bout due to visa issues. However, Kunitskaya (13-5-1 MMA, 3-2 UFC) remained on the card and accepted a bout against late replacement and UFC newcomer Julija Stoliarenko. Kunitskaya went on to dominate Stoliarenko over 3 rounds – resulting in a unanimous decision. A victory that extends the former Invicta FC champion’s UFC record. Now a respectable 3 wins from 5 bouts. With previous victories over Lina Länsberg and Marion Reneau.

But, Vieira (11-1 MMA, 5-1 UFC) who suffered her first career loss at the hands of Irene Aldana in Dec. 2019 bounced back with a decision victory over short-notice replacement Sijara Eubanks at UFC 253. A result that extends Vieira’s UFC record to an impressive 5 victories from 6 outings. With the Brazilian’s previous 4 wins coming against Kelly Faszholz, Ashlee Evans-Smith, Sara McMann, and Cat Zingano.

With both fighters coming off victories and currently ranked side by side within the UFC. This is a much needed fight for the women’s bantamweight division. But, a victory could propel either fighter towards a potential bout with women’s all time greatest mixed martial artist. Amanda “Lioness” Nunes for the bantamweight title.

However, lets hope third times the charm and we witness a great battle between Vieira and Kunitskaya on Feb. 20.

Who do you think goes home with the victory when Ketlen Vieira and Yana Kunitskaya fight on February 20th?