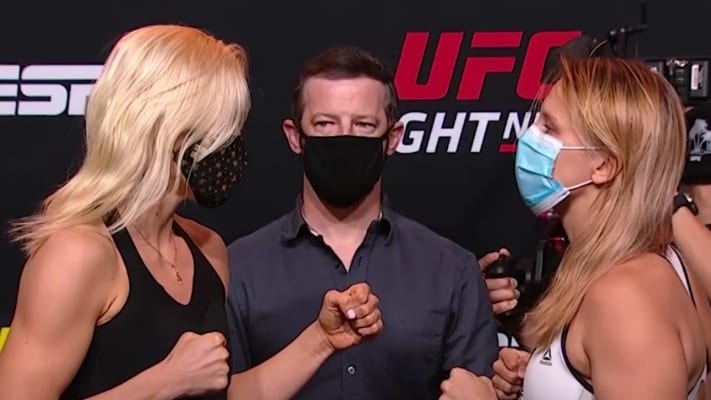 Next up on the UFC Vegas 6 main card is a women’s bantamweight bout between Yana Kunitskaya and Julija Stoliarenko.

Round 1: Stoliarenko slips and looks to land. They clinch up. Kunitskaya has Stoliarenko up against the fence but is reversed soon after. Kunitskaya reverses soon after and lands some knees. She starts to mix it up with some elbows too. Stoliarenko is attempting to pull guard but to no effect so far as her nose is bloodied up. Stoliarenko eventually falls down but manages to control Kunitskaya after a failed takedown attempt. Kunitskaya reverses again and has her clinched up once again. She continues to land knees as she did earlier in the round. They end the round swinging.

Round 2: Stoliarenko slowly attempts a spinning heel kick but it’s caught by Kunitskaya who drops her and lands a kick to the belly. They clinch up soon after and it’s a repeat of the first round with Kunitskaya landing knees again. She starts to land some lefts as well as Stoliarenko struggles to get out of the position. Stoliarenko gets to the ground but she is clinched up yet again after she stands up. Stoliarenko receives some big knees as she seems to be in great discomfort. The fight goes to the ground and it looks like Stoliarenko is attempting an armbar with just 30 seconds remaining in the round. However, she loses it as the round ends.

Round 3: The third round begins the same with Kunitskaya clinching Stoliarenko up. The fight goes to the ground with Kunitskaya in Stoliarenko’s guard. Not a lot of action takes place as the referee stands them up. Kunitskaya straight away goes for the clinch. The fight goes to the gorund momentarily but it again returns to the feet in the clinch position. They separate with over 30 seconds remaining. Stoliarenko looks for a hail mary shot but finds herself clinched up. She lands a body kick as the fight ends.