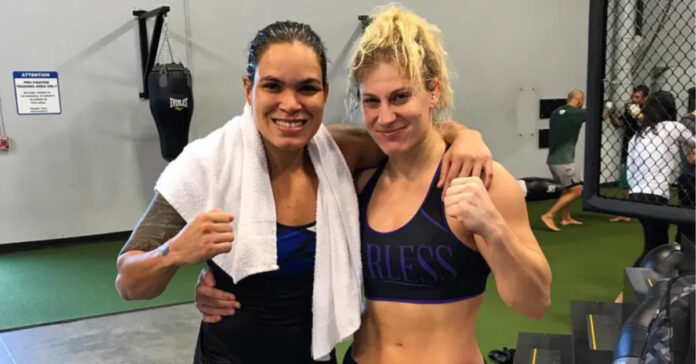 Ahead of her August SmartCage return against Martina Jindrova, two-time PFL lightweight tournament victor, Kayla Harrison has opened up on her professional relationship with former two-weight UFC champion, Amanda Nunes, explaining how much she misses the Brazilian at home facility, American Top Team.

Harrison, who boasts an undefeated 14-0 professional record, returns on August 20. in London, England – headlining PFL 9 at the Copper Box Arena in the promotion’s first visit to the UK as part of a slew of events.

Returning just earlier this month in a quarter final bracket, Harrison, a two-time Olympic gold medalist in Judo, defeated the veteran, Kaitlin Young – landing her second victor of the season format after a May decision win against Marina Mokhnatkina.

Kayla Harrison spoke of her professional relationship with past teammate, Amanda Nunes

Attempting to become the first three-time PFL tournament victor in the history of the organization, Kayla Harrison, who has been linked with an eventual UFC move and a subsequent ‘superfight’ with former teammate, Nunes, described how much she misses sharing the mats wit the Bahia great.

“I mean for me, greatly – greatly,” Kayla Harrison told LowKick MMA reporter, Michael Owens when asked how much she misses Amanda Nunes, professionally, at American Top Team. “There’s no way to sugercoat that. I mean, obviously, it is a privilege to get to work with the best fighter in the world. And to learn from her, to see her, to watch her, to emulate her, was a privilege to me.”

“Of course, I miss that, and also she’s a big – there’s not many big girls in MMA,” Kayla Harrison explained. “It was a luxury, and I definitely miss it, for sure. I feel bad that she felt – I know that in some interviews, I felt bad that she felt that way. It was never my intention to – I just want her to get better, you know. I just want her to get better with her. It was good while it lasted.”

Following her UFC 269 bantamweight title loss to challenger, Julianna Peña back in December of last year, Nunes confirmed her departure from long time home base, American Top Team in Coconut Creek, Florida – with the view to creating her own gym and team.

The reigning featherweight champion returns in the main event of UFC 277 later this month at the American Airlines Center in Dallas, Texas – rematching Peña, attempting to recapture her bantamweight title.