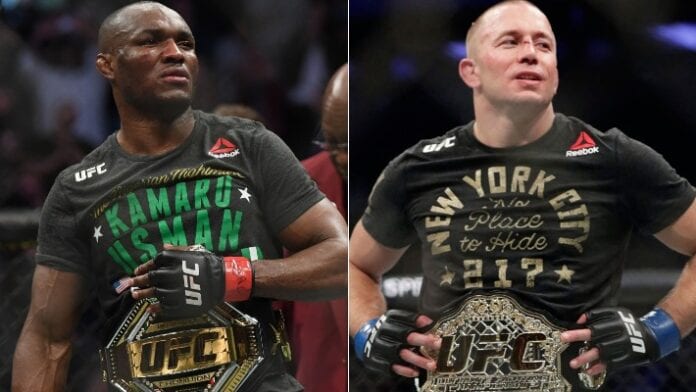 UFC Welterweight champion Kamaru Usman defeated Jorge Masvidal this past Saturday night and has his eyes set on a multitude of top contenders, but has especially recently considered the option of one day facing UFC Hall of Famer Georges St Pierre in a Welterweight title fight. Usman tied GSP for the most consecutive wins in the welterweight division, 12.

Usman spoke with TMZ Sports this week and was asked about who he would be interested in fighting next,

“Honestly, I would have to say Georges St-Pierre,” Usman said. “Right now we’re tied for the record- most consecutive wins in the welterweight division – and Georges is a tough guy, Georges is a legend. Georges is a guy who has put his time in and is considered one of the best and that’s where I aim to be. Georges can still do it. He proved it, what, two years ago when he came back, that he can still do it. And I feel that he’s still able to do it. He’s still able to come in and be that opponent where people are unsure. Like, ‘You know what? We don’t know if Usman’s got this one.’ I think Georges St-Pierre can be that guy and that’s what I’m looking for. Those are what champions are made of. When you get that feeling, ‘I’m not sure. This one’s a tough one. I don’t know how this one is gonna go but I’m gonna damn well go out there and compete and see what happens.’ I think Georges St-Pierre can be that guy and if Georges wants to do it, Georges can get it too.”

Usman went on to praise GSP, whom many consider to be the Greatest of all time in the sport,

“Georges knows what he’s done with his legacy,” Usman said. “He’s cemented his legacy. He’s put in the time, he’s put in the work, and that’s why he sits at the top as one of the best ever. So I’d love to test myself. I’m a martial artist just like he was a martial artist and if he still has some fire burning in that oven, let’s test it out. Let’s go out and see if he can still do it.” (Transcribed by MMA Fighting)

Do you want to see Kamaru Usman fight Georges St-Pierre next?