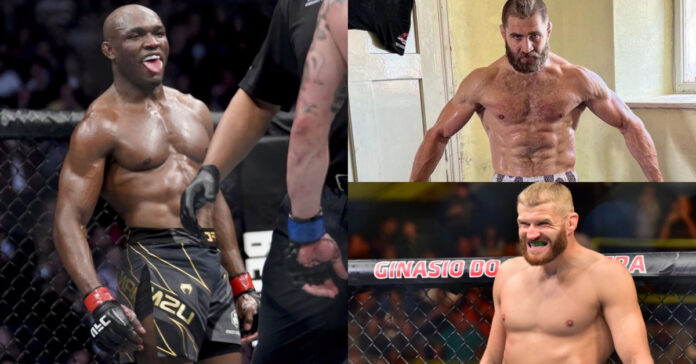 Kamaru Usman has revealed his original plan to move up to light heavyweight and return for a grand defense at welterweight.

The longtime reigning UFC welterweight champion Usman finally got dethroned by only the second-ever English UFC champion Leon Edwards last month. After getting off to a solid start, Usman looked set to rack up another win by unanimous decision. However, a brutal kick to the head from Edwards with just 56 seconds left in the contest handed Usman his first loss in the promotion.

Kamaru Usman wanted to go to 205-pounds & fight Jiri Prochazka, and Jan Blachowicz, before returning to 170 against Khamzat Chimaev

In an appearance on the popular podcast show, Joe Rogan Experience, Kamaru Usman shared his original plans prior to the shocking upset at UFC 278. He was eyeing a move up two divisions to challenge the light heavyweight king Jiri Prochazka and had he been successful in that venture, he would have looked for the former 205-pound titleholder Jan Blachowicz.

“This was my roadmap,” Usman said. “Beat Leon in the way that I wanted to and go to 205, beat Jiri Prochazka, defend with Jan, come back down, defend with Khamzat. And then, if Conor wanted to, or if Canelo at that point wanted to, do one and just sail off.”

As ambitious as his plans appear to be now, he could have had the opportunity to embark on his desired route had he retained the belt.

Usman believes that he could compete against two of the best light heavyweights in the company but admitted the challenge and did not discredit them. He seems to have the same plan in his mind, just with an additional stop on the way now.

“So, I think I could deal with Jiri and Jan. Not saying they’re not great, they’re scary, they’re f**king big scary guys, which is kind of what makes it also tempting for me. It’s cause they are scary.

“I have a new roadmap,” Usman added. “Just a pit stop, I gotta run it back with Leon.”

Do you believe this is the right plan for Kamaru Usman?