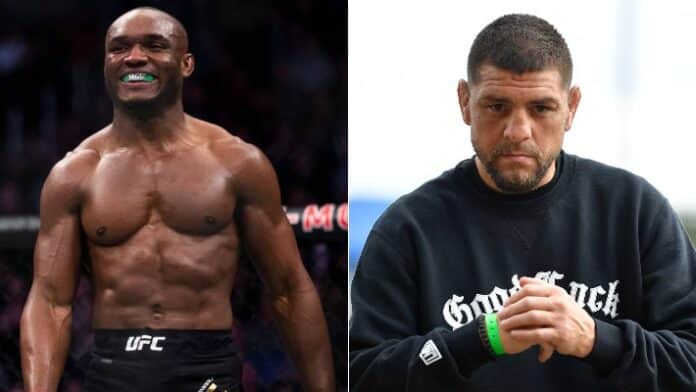 Kamaru Usman has responded to Nick Diaz‘s claims that he would “beat the s— out of him””.

Diaz is set to take on Robbie Lawler in a five-round fight at UFC 266. It will be a rematch of a contest won over 17 years ago. However, in the lead-up to their contest, Diaz has said he shouldn’t be fighting Lawler, but instead Usman. He even went so far as to say that he has a better shot at beating Usman than Lawler.

Usman has since taken to social media to respond to Diaz’s comments. The UFC welterweight champion appears to be amused by the statement, and willing to put it to the test.

While Diaz may have his eyes set on a bigger prize, he’s be best off not to overlook Lawler. Though ‘Ruthless’ is on a four-fight losing streak and dropped their first meeting, Diaz hasn’t competed sine the Obama presidency. Before he took a nearly 7 year break from the sport, he lost three in a row to Carlos Condit, Georges St-Pierre and Anderson Silva.

As for Usman, he’ll next defend his title in a rematch with Colby Covington at UFC 268. On top of his title, he will also be putting his sparkling 14-0 UFC record on the line as he draws closer to Anderson Silva’s win-streak record. Usman and Covington first met back at UFC 245 in December 2019. ‘The Nigerian Nightmare’ defended his title in a closely fought, back-and-forth affair, eventually getting the stoppage in the fifth and final round.

A fight between Usman and Diaz should both men prove victorious in their upcoming bouts might not make sense on paper, the Stockton native is a proven draw, and both Usman and the UFC have been willing to give title opportunities to whoever brings the most eyeballs to the fight.

while a number of things would have to fall into place, an Usman-Diaz title fight could come to fruition in 2022, and you most likely won’t see a whole lot of MMA fans complaining about it.

Do you wan to see Kamaru Usman take on Nick Diaz? Let us know!