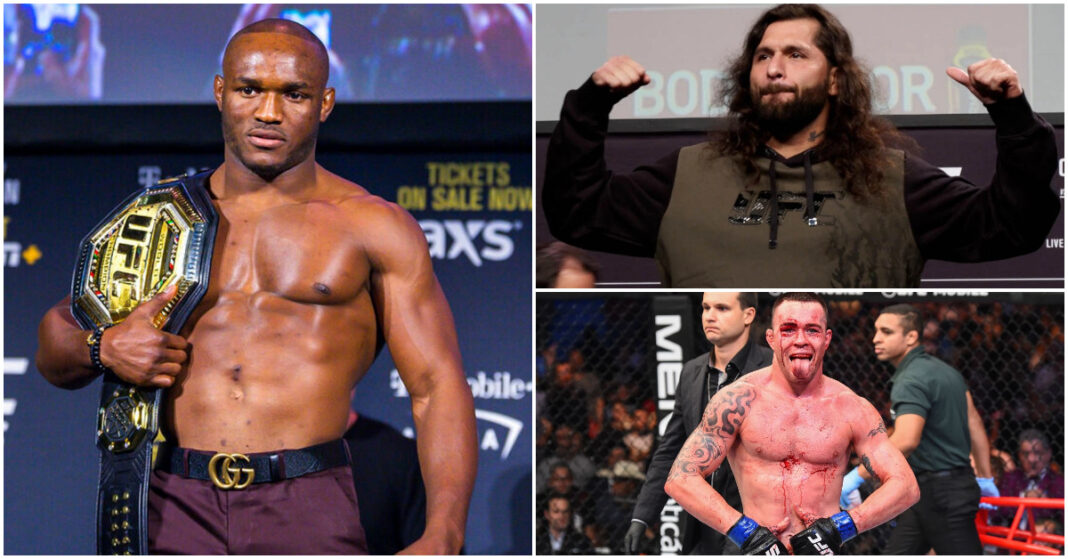 UFC welterweight champion Kamaru Usman shared his thoughts on the recent attack by Jorge Masvidal on Colby Covington claiming they are both at fault for the incident.

Kamaru Usman has beaten both of them twice and had his fair share of trash-talking to deal with against Covington. ‘Chaos’ took his antics up a notch in the build-up to their rematch at UFC 268 when took aim at Usman’s father. ‘The Nigerian Nightmare’ managed to remain composed throughout the event while Masvidal lost his cool and assaulted Covington outside the cage following their recent fight.

In a recent Instagram live session, Kamaru Usman said, “One, it’s unfortunate because it’s taken itself, it’s growing legs now out of just sports to actuality and reality.

“That’s what’s the danger about what you say trying to build a fight or leading up to a fight. You have to watch your mouth. You can’t just run off at the mouth and say what you want or do what you want and expect the opponent to still keep it sport-related.

“Of course some people, i.e like myself, I am just wise enough to understand that you could say whatever you want to say. At the end of the day, I will do my talking with my hands inside once we step in there because that is what I’m there for, is to compete.

“So you can say and do whatever you want to try and throw me off my competitive edge, which is my mind, but at the end of the day, you can’t. I will go in there and I will still handle business. But in this case, you said a lot of things that crossed the line and some people are not wise enough to not risk it all outside.” (transcribed by MMA Junkie)

Kamaru Usman says they both took the ‘L’

Pound-for-pound champ Kamaru Usman appears to agree with Masvidal in that Covington aggravated the whole situation, but believes that the ‘BMF’ titleholder did not handle the incident well.

“Now (Masvidal is) facing counts, and now you could potentially go away,” Usman added. “So that’s the unfortunate nature of the situation. I don’t like it. Both guys, I believe, are in the wrong. You can’t just do what you want and say what you want just because you want to sell something, and I feel that’s wrong – very wrong.

“But also, you can’t go as an athlete – as an elite athlete, you’re one of the best athletes in the world – you can’t just go attacking somebody in the street. Yeah, I understand it’s another athlete, but you can’t just do that when it’s outside of competition.

After a dominating unanimous decision victory by Covington, the pair did not seem to put aside their differences and continued their verbal attacks. If found guilty, Masvidal could face up to 15 years in prison and/or a $10,000 fine for second-degree felony aggravated battery with additional penalties possible from the criminal mischief charge.

As for the first-degree felony aggravated battery charge for allegedly concealing his identity by wearing a mask, the potential penalty could be up to 30 years.

Do you agree with Kamaru Usman?