“I just want to say I’m blessed to be in this position, to be able to deliver another performance like we did the first time,” Usman said Friday at UFC 268’s ceremonial weigh-ins in New York City. “If he did his homework, it’s going to be an amazing fight. But if he didn’t, I’m going to put his b*** ass away early.”

Usman successfully made weight at 169 pounds, an entire pound under the welterweight limit. His rival, Colby Covington, came in 169.4 pounds. The two rivals last fought at UFC 245 in December 2019, when Usman delivered a jaw-breaking knockout in the fifth round to put an end to one of the best fights of 2019, and one of the best welterweight title fights of all time.

Just like last time, the lead-up to this fight has been an intense affair, with Usman and Covington once again exchanging verbal, personal barbs at one another. “Chaos” remains convinced that he is the man to dethrone the number one pound-for-pound fighter on the planet.

“Tomorrow night, live on pay-per-view, I’m going to beat the brakes off Marty, I’m going to become undisputed champion,” Covington said on Friday. “I’m jumping on the Bang jet back to Miami as the pound-for-pound best fighter to ever do it, daddy.” Usman has been very active since that night against Covington, going 3-0 against Jorge Masvidal (twice) and Gilbert Burns. Colby has fought just once in that time, scoring a dominant decision win over former welterweight king Tyron Woodley in 2020. (Transcribed by MMA Fighting)

Do you think Kamaru Usman will make good on his promise to finish Colby Covington early at UFC 268? 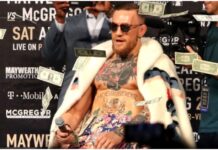