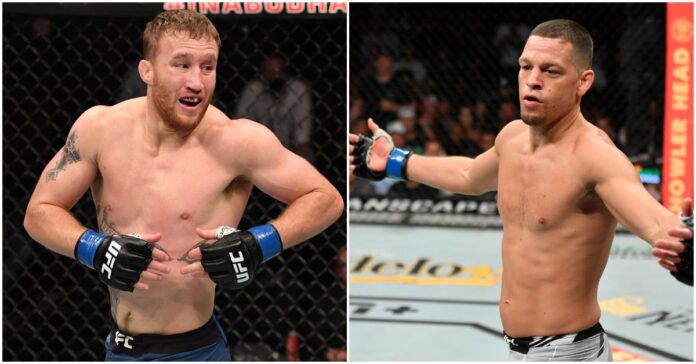 UFC lightweight fries back at Nate Diaz for mocking him for being put to sleep by a triangle from mount position.

The UFC’s No.1 lightweight contender, Gaethje is set to square off against champion Charles Oliveira this weekend at UFC 274 in what will be his second shot at UFC gold.

During an interview with Megan Olivi as part of his fight week media, Gaethje spoke about his expectations of his upcoming bout. ‘The Highlight’, explained that Oliveria must endure his punishment in order to get the victory.

“He’s going to have find me making a mistake, overreaching, and try to get into a grappling situation. Outside that, he better be praying everyday that he gets me to the ground. If not, it’s going to be the same night as [Michael] Chandler, except five rounds. If I went five rounds with Chandler, he would have died.”

One man however did not agree with this was Stockton native, Diaz- who is never one to hold his tongue. Diaz would post on his Instagram a picture of Gaethje’s quote, captioned “Bruh got triangle choked from mount. What he talkin bout.”

Gaethje, who clearly was not a fan of Diaz poking fun at his loss to Khabib Nurmagomedov at UFC 254, would clap back at Diaz, calling him jealous.

As for Diaz, his future seems unclear; he has been vocally calling for a fight for some time now but seems to be unable to come to terms with the UFC.

“I been trying to fight everybody and no go what’s the hold up ufc? I’m not fighting Conor he sucks. I’ll fight some one quit slow rolling me please. Thanks,” Diaz would tweet.

Who would you take Justin Gaethje or Nate Diaz?