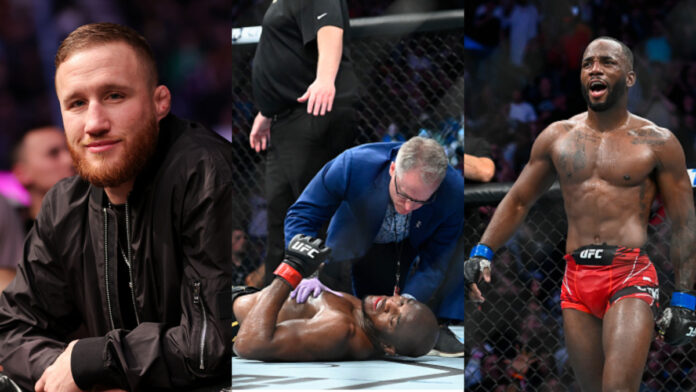 UFC superstar Justin Gaethje recently took the time to chat with LowKick MMA, and one of the topics of discussion was the soon-coming trilogy fight between his teammate Kamaru Usman and the Englishman Leon Edwards.

The second fight between Usman and Edwards was indeed historic. The pair first clashed back in 2015 and the rematch at UFC 278 was almost a decade in the making. Things had obviously changed in that time, and both fighters entered the cage that night a much more well-rounded and deadlier foe than the first battle.

Things got off to a weird start when Edwards took Usman down in the first round, which was unexpected in itself. The real surprise, however, came in the fifth round when a heat-seeking missile of a head kick by ‘Rocky’ landed flawlessly. Usman crashed to the canvas, totally unconscious, and a new champion was born. Justin Gaethje would talk about these things, and even preview the trilogy fight that’ll probably go down sometime in 2023.

Justin Gaethje talks about Usman vs. Edwards 3, and hopes the fight will be in London

“I think the trilogy’s gonna be great. I hope it’s in London. Preferably I’m on the card because I wouldn’t mind fighting in London.”

Justin Gaethje last saw UFC action back in May of this year when he faced Charles Oliveira for the lightweight title. Things wouldn’t go his way that night as the Brazilian would find the rear-naked choke early into the fight, and submit him in round one.

Currently healing from nose surgery, there’s no real date that the ‘Human Highlight Reel’ is set to return. However, expect to see Justin Gaethje in early 2023, potentially on the same card as the Usman and Edwards trilogy fight.

What do you think happens when Usman and Edwards collide for their trilogy fight?