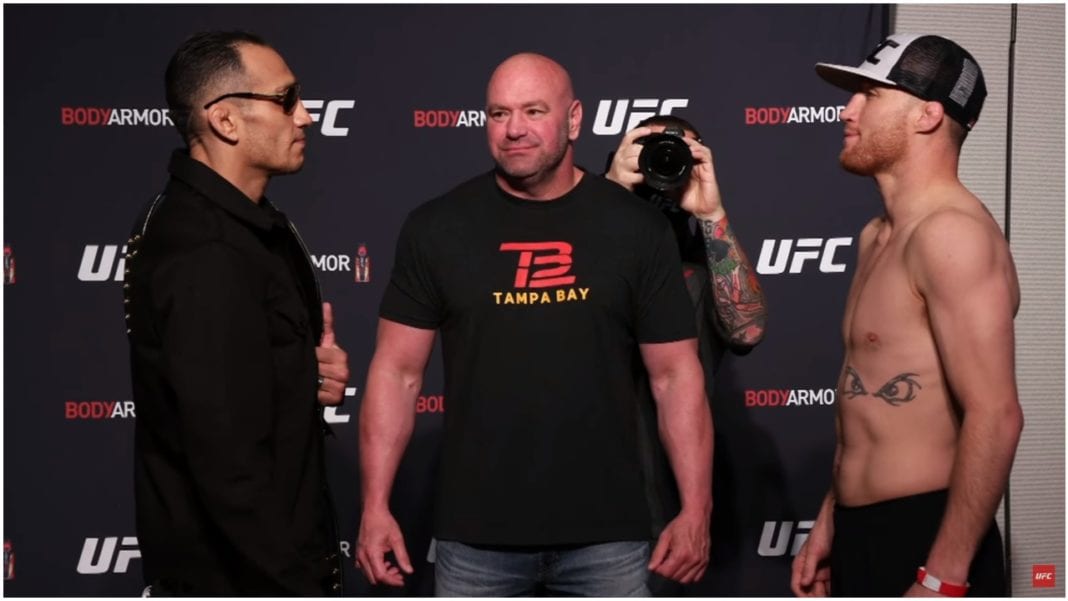 Finally! The UFC 249 main event is upon us. Tony Ferguson and Justin Gaethje are about to throw down for the interim lightweight title. Whoever emerges victorious tonight will go on to unify the division against Khabib Nurmagomedov

Round 1: Both men meet the the centre of the cage and begin battling for control. Tony Ferguson is the more aggressive early but he eats a big punch for his efforts. Gaethje lands a right hand and Ferguson simultaneously hits a low leg kick knocking his opponent to the floor momentarily. Gaethje is firing kicks and punches in with 100 percent power. Both men wind up and throw hard but just miss. Either one of them could have landed a knockout blow in that exchange. ‘El Cucuy’ comes into range and eats a right hand for his trouble – it knocks him off balance but he’s not hurt. ‘The Highlight’ lands another big left hook but Ferguson just seems to be able to eat them right now. The round ends.

Round 2: Ferguson opens up with a superman punch and Gaethje lands something of his own. Gaethje lands another left hook and it again lands clean! And another one! Any other lightweight fighter would be asleep from these blows but Ferguson doesn’t seem fazed. Gaethje lands several more big punches and Ferguson isn’t really throwing much back. He begins to pump the jab but continues to eat big shots in the process. Ferguson loads up on a right hand but wildly misses and eats a nasty leg kick. Gaethje lands more big shots. He jumps in for another big shot but eats a nasty uppercut that drops him. Ferguson doesn’t get the chance to follow up as the horn sounds to end round two.

Round 3: Gaethje seems to have fully recovered heading into round three. He’s still throwing big shots but Ferguson is putting much more pressure on him now. ‘The Highlight’ lands another huge left hook which appears to have cut Ferguson. The right eye of the TUF winner is swelling up bad now too. Gaethje lands a big shot on Ferguson and for the first time in the fight he gets a reaction which says his opponent is hurt. Gaethje stays calm and bides his time, taking the advice his corner gave him in between rounds. Both men are getting off in this round but Gaethje is definitely landing the power punches. Ferguson drops down and sweeps the leg of Ferguson. As the clock ticks down ‘El Cucuy’ runs in an gets nailed with another straight down the pipe. The round ends.

READ MORE:  Sean O'Malley On His Conversation With Conor McGregor: 'He Might Have Had A Couple Shots Of Proper 12'

Round 4: Gaethje opens up with a big leg kick. Ferguson is pressing forward, popping out punches and even throws a wheel kick – nothing of note lands. Gaethje lands another clean left hook before again hammering away at his opponent’s legs. He seems to have gone back to throwing 100 percent power as he looks to stop Ferguson. ‘El Cucuy’ is throwing front kicks to the body. Gaethje lands a huge punch and its shakes Ferguson right down to his boots. He’s wobbling and Gaethje is trying to close the show but he’s unable to land any follow-up strikes. Every time Ferguson tries to throw anything he’s eating big punches – Gaethje looks amazing right now! Gaethje eats a groin strike and gets a short break before getting back to work. He lands another huge leg kick which almost drops Ferguson. He spins around and gets straight back in his opponent’s face before round four ends.

Round 5: Ferguson lands a body kick to open the round before taking a massive shot over the top. Gaethje lands three more big shots and ‘El Cucuy’ is still eating them – this is crazy! Gaethje lands a huge one-two which clearly hurts Ferguson but he again shows the composure to not throw wildly in search of the finish. ‘The Highlight’ is beating up Ferguson now. He’s pushing him around and hurting him on a consistent basis. Another huge one-two from Gaethje who must be confused as to why he can’t put this man away. Ferguson gets buzzed off a jab and starts backing up. Gaethje follows up and Herb Dean steps in saving him any more punishment. And the new interim lightweight champion, Justin Gaethje!