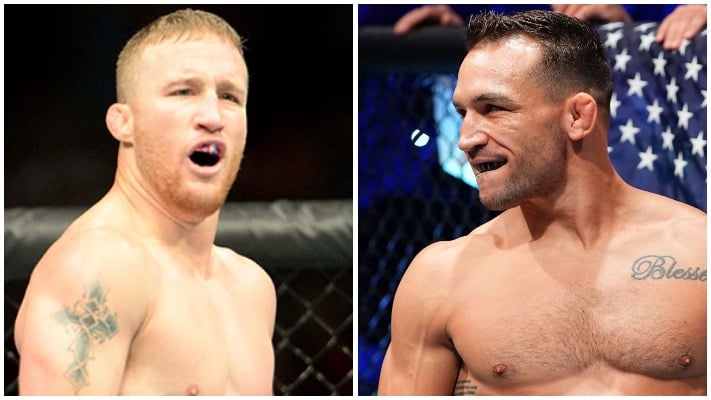 Ahead of their November 6th showdown at New York’s Madison Square Garden, 155lb KO connoisseur Justin Gaethje has scoffed at the slurs raised by his adversary, Michael Chandler.

Last month, former Bellator Lightweight king Chandler made headlines when he proclaimed that he wouldn’t be receiving a Covid-19 vaccination, despite the fact that the United States Food and Drug Administration (FDA) approved the Pfizer-BioNTech’s COVID-19 vaccine for use. Chandler had previously stated that the lack of FDA approval was the key reason for his resistance to getting one administered but recent form indicates he has minced his words.

At the time, New York vaccination mandates had indicated that all visitants to the city would require proof of vaccination upon entering a live arena, with Chandler’s remarks casting doubt as to whether he would show up to the showdown at MSG.

As it stands, Chandler would be exempt from NYC’s mandates anyway but the often-forthright Gaethje has not held back in his assessment of the faffing.

“I thought he was just seeking attention. At the end of the day, that’s private information, for one. Like, you don’t even need to talk about that because Dana White is going to handle it.”

Inactive since his second-round submission loss to 155lb GOAT Khabib Nurmagomedov back in October 2020, ‘The Highlight’ believes he is still within touching distance of contending for UFC gold once more – with a win over Chandler. This said, he stresses that he’s in for no walk in the park in The Big Apple.

“I think before he fought Dan Hooker, coming from Bellator, there wasn’t a lot that he brought to the table. But now with knocking Dan Hooker out, having a great fight against Oliveira, he’s kind of proven that he belongs here.

And ultimately for me, I need one win to fight for the title, to fight [Charles] Oliveira and [Dustin] Poirier, and that’s my goal. And this is a huge fight, this is a dangerous fight. He’s super explosive, athletic, he’s dangerous. But I think it’s a great matchup for me.”

With the bout less than two months away, the mind games now appear to be in full flow between the two. Despite an initial call-out on Instagram from the 35-year-old Chandler, who tried to bait his adversary into a centre ring slugfest with the tagline “First one to take a backward step is a timid soul,” Gaethje appears to be unfazed by the pre-fight jabber.

“He’s not going to determine how I fight, He says the first one to take a step back is a timid soul — there’s not one thing he could say that’s going to affect the way that I approach this fight or the way that I approach [him]. I will take a step backwards. He can shove it up his ass. When you’re going to see a timid soul is when I start kicking him and he’s going to start shooting for legs and trying to wrestle, and that would be his definition of a b*tch, 100 percent. And that’s what we’ll see. I think that’s midway through the first round.”

Is Chandler playing a mental game? Is it working? Let us know what you think in the comments!