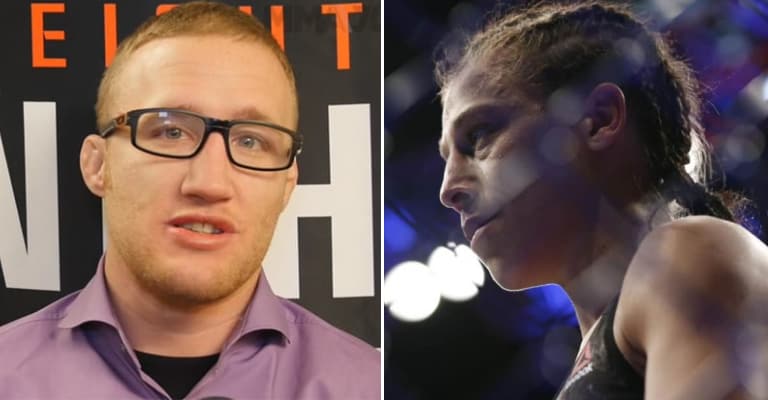 She detailed her experience of having to cut 15 pounds in only 14 hours before the fight, leading to her experiencing numbness in her legs and ultimately firing her nutritionists, Perfecting Athletes.

But that wasn’t all.

Yesterday, Jedrzejczyk doubled down on the blame game by claiming that her doctor had failed her before the fight, creating a web of finger pointing that really could not be quantified, and also one that was a moot point by now. Jedrzejczyk will meet Namajunas again in an immediate rematch at April 7’s UFC 223 from Brooklyn and will have her chance to quiet her doubters by winning back her coveted belt.

Until then, however, her detractors are going to keep doubting her blaming. One such person is UFC lightweight Justin Gaethje, who, as a friend of Namajunas, may be a bit biased but also knows the ins and outs of the fight game himself. “The Highlight” recently discussed Jedrzejczyk’s recent blaming with MMA Fighting, noting that cutting weight is simply part of a fighter’s job, making the blame fall solely on her at the end of the day.

To him, it was weak-minded to publicly bring it up:

“I don’t know her or what happened to her, so I can’t judge her for it. I think she’s weak-minded for saying it, even if it is true. It’s her own business. And no matter what, it could be true to the core and you could have proof, who’s going to [care]? Like, I’m not going to support you. Okay, whose fault was it? At the end of the day, whose fault was it? It was your fault. Do you have a scale at your house? Then you get to step on the scale every single morning, just like every single one of us do. We worry about our weight the whole camp, and I’ve never had a nutritionist help me in my entire life.

“I made weight in college eating McDonalds every day. It’s willpower. You either f*cking do it or you don’t do it. Like, the nutritionist does not cut the weight for you. And yeah, it could be detrimental to your performance, so if she did cut a tremendous amount of weight, then I’m sure that she suffered tremendously, and I am excited to see Rose fight the best Joanna whenever she doesn’t f*ck up and f*ck her weight cut up.”

Gaethje clarified his stance on the matter, adding that Jedrzejczyk knew Namajunas had cut and made weight, ultimately making whatever reason for her miss an excuse:

“Because she knows that Rose cut weight. She knows that Rose made weight. And at the end of the day, it is an excuse. Even if it’s fact, it’s still an excuse, because it was still her fault. So, I mean, as a wrestler — I’m not calling Joanna weak-minded, I’m saying that statement is weak-minded.”

Fans will see whether or not Jedrzejczyk’s insistence on passing the blame is real or not when she rematches Namajunas in just over a month. While Gaethje acknowledges her skill as one of the best in her class, he also believes Namajunas will prove her first win was no fluke because she has the former ‘Joanna Champion’ figured out:

“It’s a fight. [Jedrzejczyk] is one of the highest-level fighters in that weight class in the world,” Gaethje said. “Anybody in the top-five can beat each other on any given night in this sport. So I think she has a possibility (to win), but I don’t think — she can’t just go and change her whole (style). She can’t change the way her feet move. And Rose beat her because of the way her feet move, because she could time the way her feet move, and Rose is going to do the same thing with her feet.