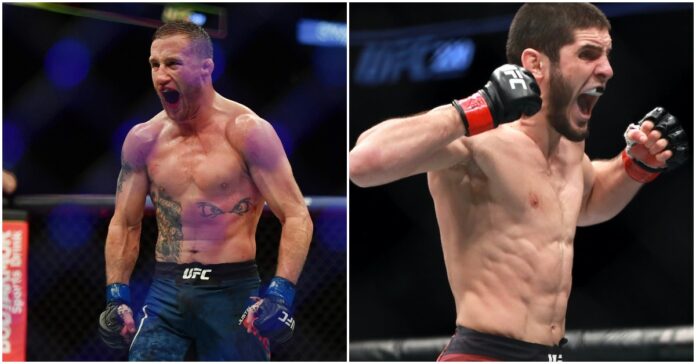 Justin Gaethje thinks that Islam Makhachev has more to prove before fighting for the Lightweight championship.

Gaethje has been vocal with his feelings on who he believes should get the next title shot. ‘The Highlight’ has gone on record claiming he has been beating top guys inside the division, and believes he should be up next to fight against the winner of the Dustin Poirier vs Charles Oliveira title bout.

Makhachev has been dominant since his UFC debut loss inside the octagon. He has won nine fights in a row, with his most recent victory over Dan Hooker being the most dominant of them all.

Gaethje has been trading words with “Khabib Nurmagomedov” (Ali Abdelaziz 100% runs his account) on Twitter regarding his close friend Makhachev.

Gaethje was a guest on the ‘UFC Unfiltered’ podcast when he had this to say regarding Makhachev,

“Makhachev fought No. 14, went to No. 5 and fought a late replacement in Dan Hooker. It wasn’t Dan Hooker on a full camp. It does not count as much, but still, it’s two top 15 guys, none in the top five, only one in the top 10. That’s not how this sh*t works. Do your f*cking job, fight these guys, and Beneil Dariush is right here. And I like the dude, he’s my friend so you know I’m just going to jump over this man and expect to get a title shot when the No. 3 guy is Beneil Dariush. Handle that. That has to be handled.” (T/C MMAJunkie)

Gaethje took some incredible shots from Chandler that would have put a lesser fighter out. That fight was an absolute war and should have granted him the next shot at gold. Gaethje seems to believe that Poirier will beat Oliveira and will prompt a rematch between the two. Gaethje has even said that he believes Oliveira doesn’t have ‘that dog inside of him’, even though Oliveira was able to dig deep and sleep Michael Chandler after almost being finished himself. Which, if we are keeping count at home, was something Gaethje couldn’t do to Chandler.

Do you believe that Justin Gaethje should be next up in line for a title shot?