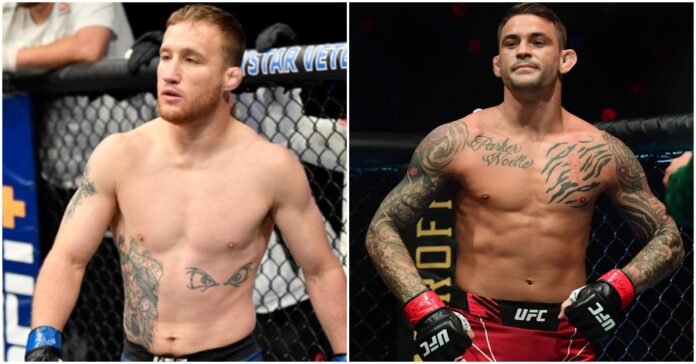 Justin Gaethje believes Dustin Poirier will walk away from MMA if he beats Charles Oliveira on December 11.

The former interim UFC lightweight champion currently holds the number two spot in the division and is coming off a fight of the year candidate with Michael Chandler. Gaethje seems to have secured his shot against the winner of Oliveira and Poirier who will compete for the 155lb strap at UFC 269 next month.

Gaethje seems like the most likely candidate to be next in line, UFC president Dana White even stating ‘it makes sense.’

The only problem that could come in between ‘The Highlight’ and a title shot is Islam Makhachev, who is also laying claim.

Although the number four ranked, Makhachev has garnished hype, the likelihood of him fighting for a title next is slim.

A Dustin Poirier Win Could Mean A Rematch With Justin Gaethje

It is of the opinion of Gaethje that the matchup between Oliveira and Poirier will set up the rematch between himself and Poirier. He told UFC Unfiltered “I’m not high on Oliveira yet, and I get a lot of shit for it.

“He’s a quitter. He is a quitter. He showed it to you in the Michael Chandler fight. At the end of the first round, he was not looking good, he didn’t want to be there.

“He doesn’t want to be there when it gets nasty. That’s just what I think, that’s my opinion. And Poirier is going to beat him up.” (Transcribed by MMA Fighting.)

The first fight between Gaethje produced an absolute back and forth war which ended in a TKO win for Poirier. After this battle, Gaethje feels Poirier might not want round two,

“I know for a fact that when Dustin Poirier has to get in there with me again, he is going to remember and constantly be analysing that night. He was not out taking pictures,” Gaethje told Damon Martin. “He was probably in the most pain of his fucking life, and if he doesn’t land the shot in the first round, he knows he’s going to have to go through it again.

“If he beats Charles Oliveira, I don’t know if he fights me. I think he just walks away, calls it good,” Gaethje added. “If Dustin Poirier wins, I’m going to have to really entice him to fucking get in there again… Now he gets to fight a more refined, and a more sophisticated psychopath.”

Do you want to see Justin Gaethje and Dustin Poirier rematch for the title?