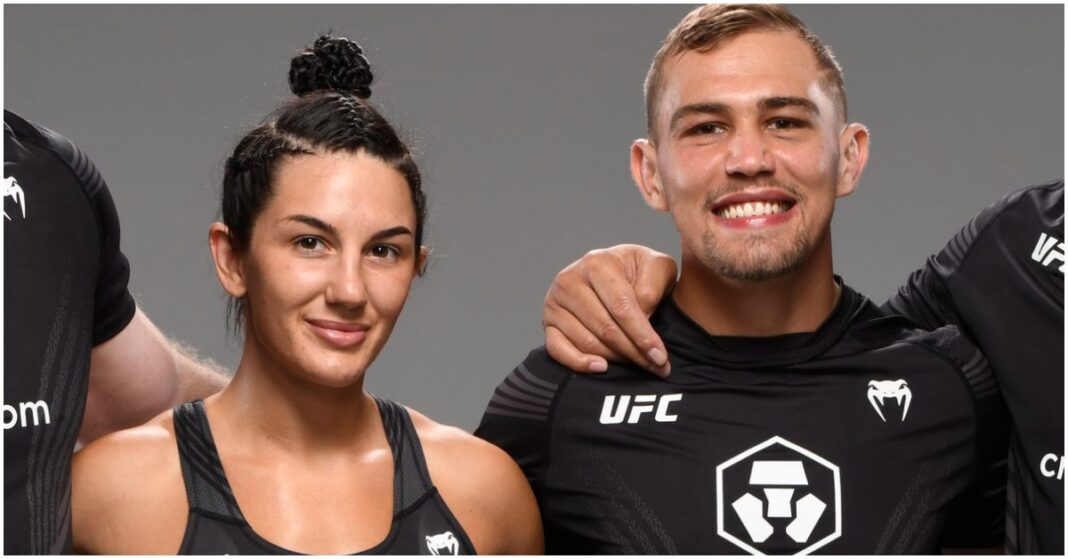 JP Buys and Cheyanne Vlismas, who used to go by the name Cheyanne Buys, are currently in the process of getting divorced and the two UFC fighters are having a very public break-up.

Buys earned his UFC contract in 2020 on Dana White’s Contender Series. In 2021, he fought twice inside the Octagon but walked away winless on both occasions.

Vlismas fought three times in the UFC last year and managed to come away with a 2-1 record. The 26-year-old suffered a decision defeat in her promotional debut before bouncing back with successive wins, that made her $100,000 in bonus money.

During a recent interview with MMA Fighting, Vlismas revealed that she has moved out of the United States and is currently hiding out in an unknown country.

“Unfortunately, I would love to fight again [and] soon, but because of reasons beyond belief, I cannot fight, and I cannot make any more money until I finalize some things in my life, and I don’t know when that will be,” Vlismas said. “I’m trying to make that soon, but I don’t have an answer. I’m hoping by summer. I’m praying by summer. That’s what I’m gonna shoot for. As far as 2022, you’ll see me, but I have no answers. And honestly, it makes me want to cry how I have no answers for anything.”

“A lot of things happened before my fight — and even after my fight — and I decided what’s best is to just escape,” Vlismas continued. “I’ve been gone now for two weeks and I love it. I’m overseas and just living my life. The only thing I truly hated was the first time you saw me in 2021, for my debut. It was a great camp, but I got injured right before the fight, 10 days out. [I was] very badly injured, needed surgery. I took the fight still, got an opponent change, got embarrassed in my debut, I couldn’t do anything. Then (I) got the surgery, got back into fight camp, had a good fight. Then, getting a divorce.. It’s been a roller-coaster, to say the least.”

JP Buys Accuses His Wife Of Having An Affair

Buys took to social media to respond to the interview his wife had given. The UFC flyweight claimed to know exactly where Vlismas was and also accused her of cheating on him with a man called Roman.

“@MMAFighting Hiding from what? In a country no one knows where she’s at? Everyone here knows she has been in Batumi Georgia with Roman, the same guy she has been having an affair with behind my back. While still married,” Buys wrote on Twitter.

What do you make of JP Buys & Cheyanne Vlismas having a very messy and public divorce?