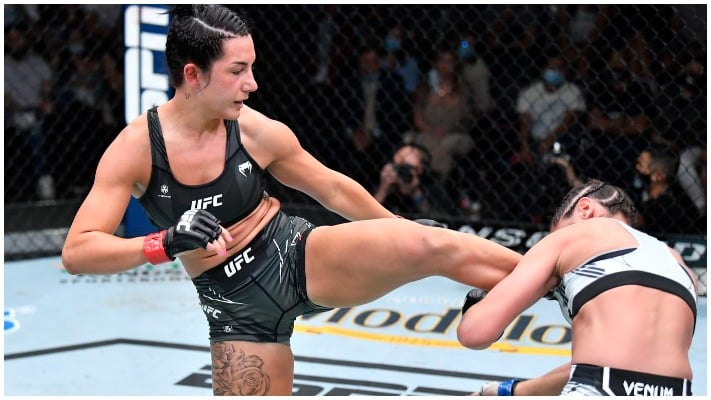 UFC Vegas 33 lost three fights less than 24 hours before the event was due to start. Luckily, four fighters stepped up to save the card that was headlined by a rather one-sided five-round middleweight match-up between Sean Strickland and Uriah Hall.

Cheyanne Buys – Performance of the Night

The strawweight fighter needed just 60 seconds to take out Glória de Paula in their surprise co-main event slot. Cheyanne Buys entered the fight with tons of pressure on her shoulders after failing to impress in her UFC debut. Buys landed a perfect head-kick to drop her opponent before following up with punches to finish the fight and secure herself a $50,000 bonus cheque.

Buys explained post-fight just how important the bonus money was, she said.

“I am negative in my account right now. So it’s gonna make a big difference. My whole paycheck is I have to pay back $15,000 for a loan I got from a few people, so I made 10 and 10 for my win and show so that $20,000 was just gone. And I’m okay with is, I was okay if I won and that check was gone because I made that move out here and I knew that this fight was just gonna be for the move. It was the best decision me and my husband made for our careers and just to get that bonus…

“I’ve been so broke my whole life because of this sport but it’s so worth it to me because I love this sport, but to get a $50,000 paycheck, my husband’s gonna tell me to put it away, I’m definitely gonna want to buy some nice stuff, but I like to buy a little bit of things for the house and for my animals. I really like to spoil my family, but this week I’m definitely taking my team to go get a nice dinner. It’s life-changing for sure, but I’ve got to put the money away and just go out there and fight again.” (Transcribed by MMA Fighting)

Melsik Baghdasaryan – Performance of the Night

Melsik Baghdasaryan looked fantastic in his UFC debut. The Armenian fighter earned his way to MMA’s premier promotion last year during an appearance on Dana White’s Contender Series, picking up a unanimous decision win over Dennis Buzukja. Baghdasaryan didn’t need the judges last night as he dominated Colin Anglin before securing a beautifully vicious head kick KO that earned him a $50,000 bonus.

Jason Witt vs. Bryan Barberena – Fight of the Night

The best fight at UFC Vegas 33 came when welterweight sluggers Jason Witt and Bryan Barberena squared off. It was a back-and-forth fight that went the full three rounds before Witt was given the majority decision win. Both men bagged an extra $50,000 for their show-stealing bout.

Do you think the right people got bonus money at UFC Vegas 33?