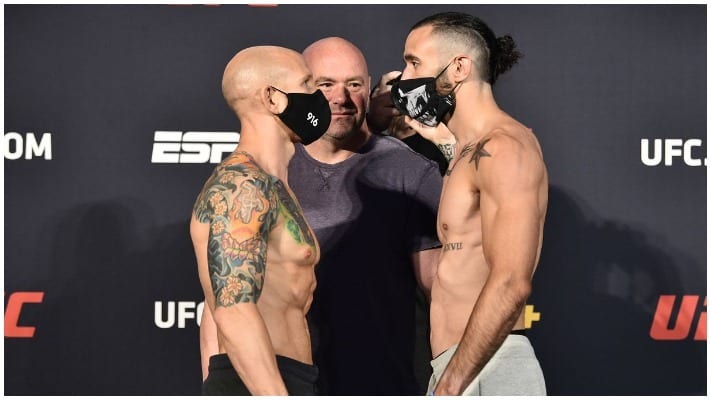 In the UFC on ESPN 11 co-main event featherweight contenders, Shane Burgos and Josh Emmett throw down. Both men are ranked in the top 10 at 145lbs and the winner of this fight will be one step closer to a shot at Alexander Volkanovski.

Round 1: Shane Burgos is pushing forward early. Josh Emmett is backing up but swinging wild to keep Burgos honest. Emmett is landing big shots but Burgos is eating them well. The New Yorker is popping out jabs and low leg kicks but continues to eat big shots. Another huge right hand from Emmett – Burgos is made of steel! His low leg kicks are starting to taking a toll. Burgos lands a few consecutively and is getting a reaction from his opponent now. Burgos rips one to the body, dips out of the way of Emmett’s overhand right, and lands three jabs. More jabs and more leg kicks from Burgos force Emmett to mix up the game plan – he shoots in for a takedown but is unable to get it. The 35-year-old instead fires off two big right hands that partially land as the round ends.

Round 2: Josh Emmett mentioned in the corner he had injured his knee in round one, as round two begins Burgos is throwing shots at the leg. Emmett lunges forward and lands a couple of big punches. Burgos cant miss with his jab and he’s using it to set up some nice combos now. Emmett though continues to throw big with his right hand and continues to land it too. Emmett lands a few more big shots but Burgos is undeterred and still pushing forward. Both fighters are landing constantly in this fight. Emmett clearly landing bigger shots but Burgos is hitting him with good volume – it’s very intriguing as round two enters its final minute. Burgos lands his biggest shot of the fight Emmett is just as tough as his opponent and he returns with one of his patented power rights as the round comes to a close.

Round 3: Emmett lands two big right hands at the start of round three. Burgos back to his jabs and legs kicks. Emmett lands a big shot to drop Burgos – the biggest moment of the fight. He spends some time in the guard of Burgos before the fight goes back to the feet. Burgos nails Emmett with a groin strike and the fight comes to a stop as he recovers. Back to fighting and Emmett is back to landing huge overhand rights. Burgos continues to pressure but he eats a huge overhand left and he’s down again much heavier than the first time. Emmett is in the guard hitting Burgos with elbows and punches. Burgos kicks his opponent off and gets back to his feet. They go straight back at it. Burgos is landing but his shots don’t have the same pop as Emmett’s and he’s not stopped throwing throughout round three. Another HUGE right from Emmett followed by two more. How is Burgos still standing? Both men swing to the finish. WHAT A FIGHT!