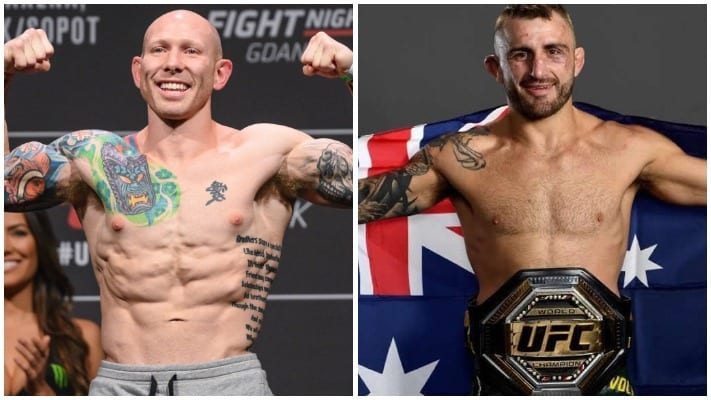 A win would put Emmett on the cusp of big things and that is something he is very aware of. The Team Alpha Male standout will have a close eye on the upcoming featherweight title bout between Alexander Volkanovski and Max Holloway who will rematch at UFC 251 on July 11. Speaking exclusively to LowKickMMA Emmett revealed he believes Volkanovski will beat ‘Blessed’ again to retain his title, he said.

“I was calling it before they fought the first time. I kept saying in interviews that Volkanovski was going to upset Holloway, just because stylistically it is not a good match-up. I think it’s going to be the same outcome. I just believe stylistically it’s not a good match-up. Max (Holloway) would have to catch Volkanovski and put him away but I feel like Volkanovski, just his body type, he stays in his shell and he’s super technical, powerful, explosive and he comes from a wrestling background. I just feel like it’s going to be too much, and it will be the same outcome. I see him pulling off another decision, otherwise, I could even see Volkanovski landing a huge shot and possibly getting the TKO, but I do think he’ll be the champion after the fight.

While Emmett realizes he still has some work to do he has already thought about squaring off against the featherweight champion and believes they would make for a “super exciting fight”, he said.

“I’ve always said I think Volkanovski and I would be a super exciting fight because we are so similar in styles. We are like the same height, same build, same background. I feel like we are both some of the more explosive and powerful fighters in the division and we both come from wrestling backgrounds. So, I think that would be, stylistically an awesome fight and a perfect fight for me He’s a great champion. He’s a great fighter. He’s beat some of my teammates so I would love to get that back for them too.”