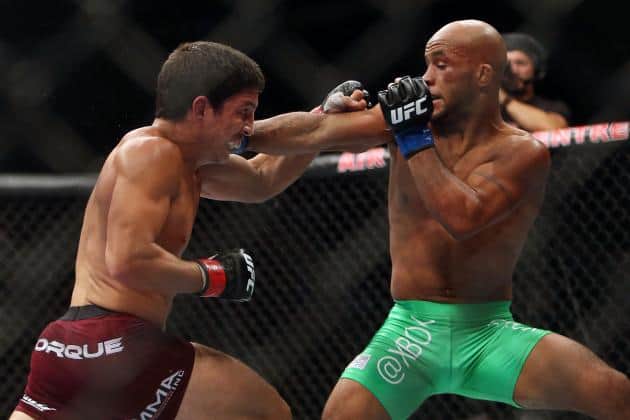 Joseph Benavidez beat Ali Bagautinov in a flyweight bout at UFC 192 and is now looking to the future for his pro-MMA career.

Demetrious Johnson has reigned over the UFC flyweight division for some time now and has beaten Joseph Benavidez twice already. It seems that that “DJ” is the only thing that stands in the way of Joseph Benavidez and the championship while Benavidez is one of the very few in the division that gives Johnson a challenge.

Coming out UFC 192, many think that the UFC might book the third bout between these two fighters.

However, Joseph Benavidez plans to take some time off following this win for a wedding, which means we may have to wait for that bout between the two fighters.

“Seeing how great the champion’s performances have been, obviously that motivates you every day,” he said following the event. “And for everyone, I’m willing to fight the champion whenever, any single time out. After every fight, I’m ready to do it.”

Joseph Benavidez (23-4) is currently on a four-fight winning streak. In his last six bouts, he is 5-1.

” … Beating tough guys day in and day out – now it’s four in a row – that only helps. I understand it takes some time. There are some other contenders out there. But I’m ready to do it every time. I think you could have me and ‘Mighty Mouse’ fight 20 times, and it’s going to be entertaining and exciting one way or another.”

It should be noted that Johnson has gone on record by saying that he plans to return in February on the Super Bowl weekend card, which in turn could actually lead to the third bout between the two men after all.