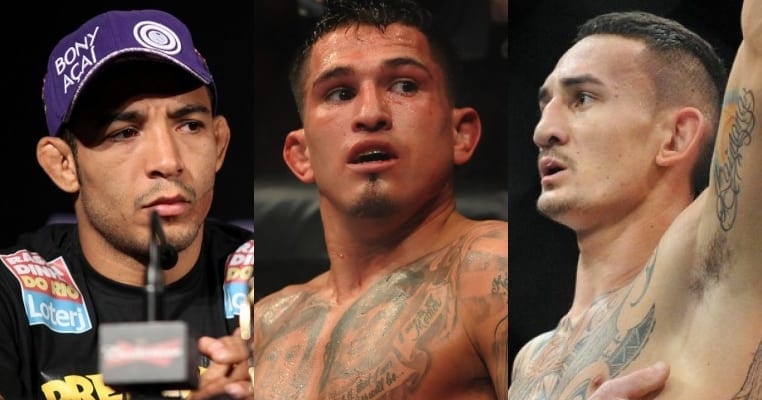 If Max Holloway thought Jose Aldo was already ‘running scared’ from him, this is really going to make him mad.

One day after “Blessed” called out the interim featherweight champ for waiting for his rematch with Conor McGregor or even taking a fight against new 145-pound contender Anthony Pettis, Aldo confirmed to Brazilian show Revista Combate (via MMA Fighting) that he wants his rematch, but if he can’t face off with ‘The Notorious’ again, he’d prefer a bout with ‘Showtime’ because it would sell better:

“I’m already frustrated that it might happen. Every night I ask ‘give me one more chance to get in there again with him and I know it won’t happen again.’ but if it’s not him, I think I’d prefer to fight Pettis. I with them learned that I don’t have to look at the promotion’s side, the title run. A fight with Pettis would sell a lot more than Holloway.”

The former lightweight champ recently made a splash debut at August 27’s UFC on FOX 21 by submitting tough challenger Charles Oliveira in a back-and-forth affair, but Aldo said he believes Holloway, who’s racked up an insane nine straight wins, is the much tougher opponent:

“Holloway is way tougher than Pettis today. ‘Do Bronx’ (Oliveira) was winning the fight, but (his cardio) goes down drastically during the fight. I think that a fight with Pettis would sell a lot and is way easier for me. If I had to choose one of them it would be him because it sells more and I have a better chance, but I respect him.”

Aldo won the interim title with a second decision win over Frankie Edgar at July’s UFC 200, and is now set on fighting for the undisputed belt next no matter what. McGregor, on the other hand, has been linked to a possible lightweight title fight against 155-pound champion Eddie Alvarez, or even a monumental super fight with former welterweight champ Georges St-Pierre, meaning that the featherweight title defense Dana White swore was coming might never truly happen.

The Nova Uniao superstar revealed he’s trying to get on UFC 205 in New York City, and wants the biggest money fight possible after following White’s lead. His longtime head coach Andre Pederneiras is negotiating with the UFC to hopefully get him a spot in what might be MMA’s biggest card of 2016:

“It makes sense, but I’m not looking at the whole title thing now,” Aldo said of fighting Holloway in New York. “I look at the financial aspect of it. I thought about my legacy and career before, but now I look with different eyes. I think Dana White taught me that. The biggest slice of the cake has to be mine.

“I’m trying to get a fight at this UFC card in New York, but we’ll see what ‘Dede’ (Pederneiras) has to say when he comes back. ‘Dede’ is (in Cleveland) now for a meeting with Dana to decide our future. I hope everything goes right. If it’s not against (McGregor) we fight for the undisputed belt. We’ll see.”