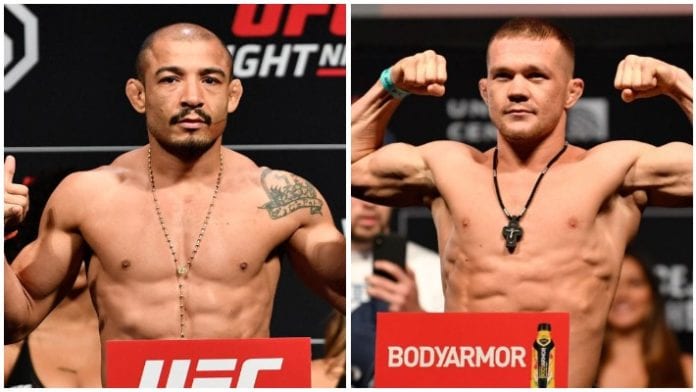 Jordan Ellis: I am picking Petr Yan to stop Jose Aldo inside the distance at UFC 251. He is the future at bantamweight and I expect he will prove that tonight. Aldo is certainly capable of springing the upset despite being far past his prime heading into this fight. The Brazilian carries a considerable size advantage into the octagon and he will be Yan’s toughest test to date but it is a test Yan will pass with flying colours.

Ryan Galloway: I am going to take the veteran Aldo against Petr Yan in the bantamweight title fight. Aldo is much more experienced and has defeated higher calibre competition, due to this I think he is being overlooked by a lot of people and may pull a big upset tonight.

Harry O’Connor: For me this one is a close fight, I think this will be Aldo’s last shot at gold in the UFC. I can see this being a very close affair on the feet. However, I think Yan’s youth and ruthlessness will earn him the title against Aldo. I can see Yan winning by KO in round 4.

Abhinav Kini: Petr Yan should get the win and become the new bantamweight champion. That’s not to say Jose Aldo has no chance. I certainly thought he beat Marlon Moraes and Yan hasn’t looked invincible in the Octagon either. But if I had to bet house on it, I would go Yan decision. Just see him gradually taking over and getting the verdict.