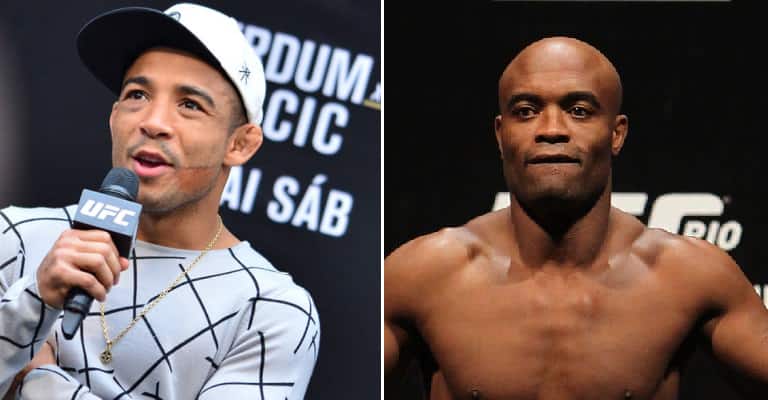 Brazilian MMA legend Jose Aldo has looked up to longtime former champion Anderson Silva for a decade, and now that “The Spider” has been caught for the second time using performance-enhancing drugs, “Junior” feels that Silva’s legacy has taken a massive hit.

Aldo expressed his thoughts to MMA Fighting on recent failed drug tests from his fellow Brazilian mixed martial artists as he prepares to rematch Max Holloway for the featherweight belt:

“But with Junior ‘Cigano,’ no,” he continued. “Junior ‘Cigano’ and I have the same doctor, we come from the same lineage, so I don’t believe he took anything that enhances the performance or something like that. I think he’s more innocent than guilty.

“And I don’t know what happened with ‘Minotouro.’ I think athletes today make the mistake of trying to self-medicate sometimes without asking their own doctors, and that can hurt you. USADA and WADA change a lot the components that are doping, we receive e-mails all the time saying what is and what is not, but sometimes you make a mistake and it happens.”

Many fighters have obviously popped for PEDs after USADA began increased, around-the-clock drug testing for UFC competitors in July 2015. As Aldo stated, former heavyweight champion Junior Dos Santos has also been punished for failing a drug test, as well as Antonio Rogerio Nogueira.

Do you think Silva’s legacy has been tarnished following his second failed test?