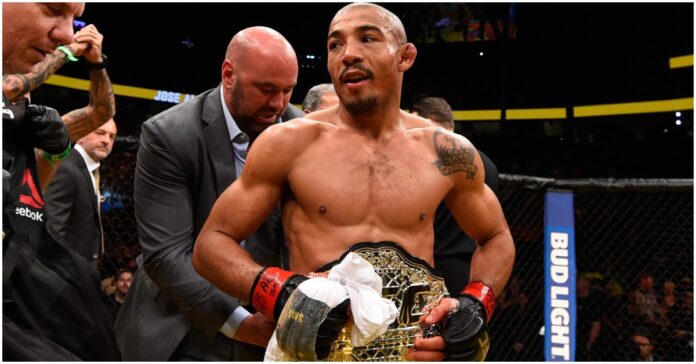 Jose Aldo has revealed that Conor McGregor sent him a gift in the aftermath of his win over Frankie Edgar at UFC 200 in 2016.

‘Scarface’ and ‘Notorious’ were involved in a bitter build-up to their featherweight title fight at UFC 194. The bout was infamously ended with just one punch by McGregor who has since gone on to capture another title at lightweight while Aldo has rebuilt his career at 145lbs and more recently at bantamweight.

During a recent appearance on MMA Fighting’s Portuguese-language podcast Trocação Franca, Aldo revealed how the relationship with McGregor began to heal after UFC 194.

“When I fought Frankie Edgar and won the title again, (McGregor and I) were staying at the same hotel, side by side. He saw me, and even sent a gift congratulating me for the belt I had just won,” Aldo said. “That was intimate, brother. He knows that, he sent it to my room. I see no problem with that. It was a way of trying to show love for me and my family. It was really intimate. It was nice, it was nice. I don’t know what his intentions were, right? But it was nice.”

Aldo is scheduled to face Rob Font in what appears to be a bantamweight title eliminator on December 4. Last time out, the Brazilian was at his brilliant best when he picked up a decision win over Pedro Munhoz at UFC 265.

McGregor is currently side-lined due to an injury he suffered in his UFC 264 trilogy fight with Dustin Poirier. After a tough first round the former dual-weight UFC champion suffered a nasty leg break that ended the fight. McGregor is expected to return to the Octagon in the summer of 2022 and has been busy on social media during his rehabilitation, calling anyone and everyone ahead of his return.

Do you like to see fighters such as Jose Aldo & Conor McGregor put their rivalry to one side after the fight is done?