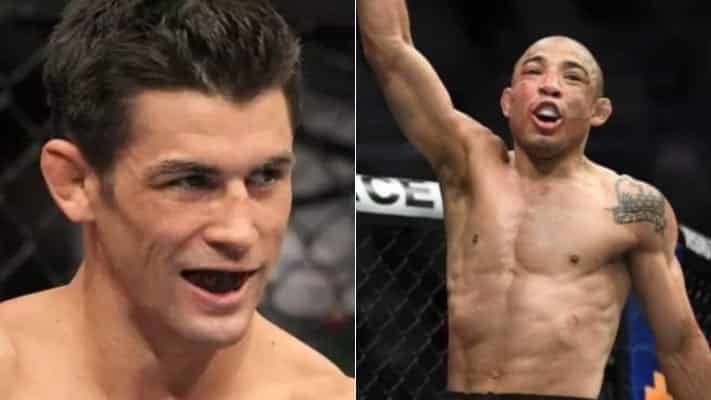 Jose Aldo is open to a fight with Dominick Cruz.

Following his impressive unanimous decision win over Marlon Vera, Aldo was receptive to a fight with former bantamweight champion Cody Garbrandt after the latter called him out.

However, Garbrandt ended up getting booked to face Rob Font instead. Another target for Aldo was TJ Dillashaw only for him to get paired with Cory Sandhagen.

Now, Aldo is targeting a fight with Cruz in a matchup that many combat sports fans have wanted to see for ages.

Aldo claims he has already asked the UFC for that fight as well and is just waiting for a response.

“[Garbrandt] asked for the fight and I agreed right away, but the UFC shot it down,” Aldo explained. “[Garbrandt] and I had already agreed, it was all set, and the UFC didn’t think it was a great fight, they wanted him to fight Rob Font.

“We ended the [Vera] fight last year and asked for Dillashaw and Garbrandt and now I have none. I’m on the dance floor without a dancing partner [laughs]. But we’ve been asking for Dominick Cruz for a while now and that’s a fight everybody asks for. We’re expecting to fight him. But I don’t know if it will happen, right?”

As for what he makes of Cruz, Aldo was nothing but complimentary of the former bantamweight champion who recently returned to the win column earlier this month against Casey Kenney.

“He’s a great fighter, has always had great performances,” Aldo added. “If it wasn’t for his injuries he would still be competing for titles at the top. Injuries have been an issue for him, he hasn’t been in the UFC what we were used to seeing from Dominick Cruz.

“I’ll always see myself as a title contender, there’s no escape. Becoming the champion is all I think since the moment I moved down to this division. I’m ranked No. 5 now and I want to fight more often. You can be sure that sooner or later we’ll grab that belt.”

Do you want to see this fight? Who wins?