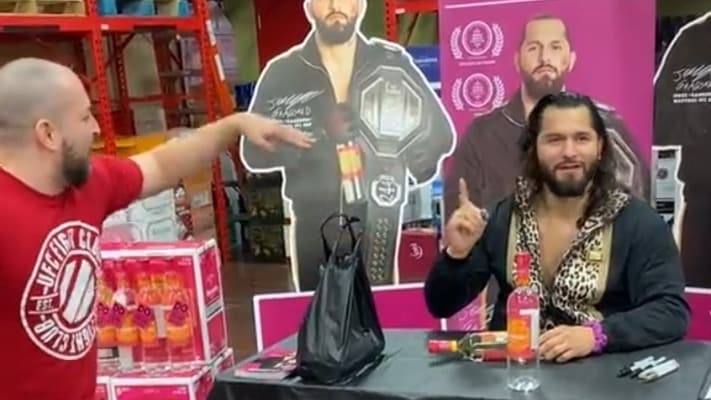 UFC welterweight star Jorge Masvidal doesn’t get rattled or surprised too often, but that all changed after a fan did a spot-on impersonation of legendary announcer Bruce Buffer at a recent autograph session in Las Vegas.

Masvidal, who is coming off of back-to-back losses to welterweight champion Kamaru Usman, was in the process of signing bottles of his signature bottle, El Recuerdo at a liquor shop when a young man named Matt Parrino went up to him to get a signed bottle. As Masvidal put pen-to-bottle, Parrino shocked the crowd around them by doing a full-on fighter introduction of Masvidal in the middle of the shop, sounding exactly like Buffer.

Once Parrino was finished, Masvidal gave him applause and even appeared to offer him a new job as an announcer for his still-new fight promotion, Gambred FC. Masvidal appeared to reiterate his interest in signing Parrino to his promotion as a broadcaster in a recent tweet of his over the weekend.

As of right now, it’s unclear as to whether or not Masvidal has really offered Parrino a job as a ring announcer, but time will tell. The clip of Parrino and Masvidal during the Bruce Buffer impersonation went viral on social media and fans all over the world praised Parrino for his efforts.

Buffer, along with Masvidal, is one of the most beloved personalities in MMA history, outside of the fighters themselves. His incredible personality combined with his showmanship, energy, and strong relationship with the athletes in the cage. He joined the UFC in the mid-1990s, during the time in which the promotion was struggling badly financially. Fighters like Masvidal have risen to the upper echelon of the sport in recent years.

Masvidal has been busy away from the octagon as well. He recently held the inaugural event of his Gamebred FC promotion and is targeting a return to the UFC later this year, mostly against the returning Nick Diaz.

What is your reaction to this spot-on Bruce Buffer impersonation?