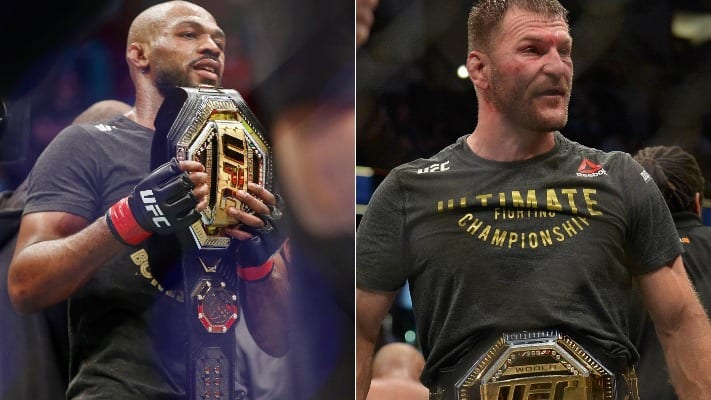 UFC 252 took place Saturday night and Jon Jones was a keen observer during the main event.

Despite their rivalry, Jones was actively supporting Cormier during the fight. However, he eventually turned his attention to moving up to the heavyweight division himself as he targeted a fight with Miocic in the future.

“Heavyweight world championships I will be seeing you real soon. Victorious

“This is exciting for me

“Avoid Stipe’s right hand, I’m too fast, I’ll be too strong when the time is right and have way too much energy. Soon and very soon I’ll be considered the baddest man on this planet”

Jones has been hinting at a move up to heavyweight for years and most recently did so earlier this summer when he was campaigning for a super fight with Francis Ngannou.

However, failed negotiations with the UFC led to the fight not coming to fruition with Jones seemingly vacating his light heavyweight title afterwards due to his unhappiness at not being paid his worth to move up.

What do you think of Jones’ comments?