LowKickMMA.com
Home UFC News Jon Jones Opens Up As 2-To-1 Favorite Against Stipe Miocic In Potential... 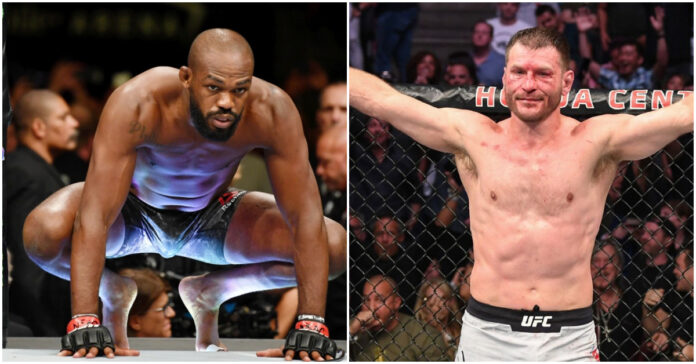 Jon Jones has received backing from the oddsmakers to win in his potential heavyweight debut fight against Stipe Miocic which has been loosely targeted to take place this summer.

UFC president Dana White expressed interest in a potential match-up with Stipe Miocic and Jon Jones, stating that it makes sense to book the fight this summer. The speculation about who Jones will take on in his debut fight at heavyweight has been rife over the last two years. Initially expected to move up to face Francis Ngannou, it now appears that Jones will be facing former champ Miocic during international fight week.

With the aforementioned Ngannou expected to sit out the year as he heals from his injuries, Jones could be looking at an interim title shot in his first show at heavyweight against one of the greatest heavyweight champions in the history of the promotion.

According to the opening betting line from Sportsbetting.ag, Jones is currently a 2-to-1 favorite over Miocic.

UFC has had contract dispute issues with both Jon Jones and Francis Ngannou in recent months. While it seems like Jones is more willing than before to make his next fight happen, the promotion still needs to work out a deal with their current heavyweight champion.

Dana White had hinted at the possibility of an interim title belt being on the line which means that Ngannou will face the winner of Jon Jones and Stipe Miocic in his return to the octagon in a title unification bout.

Ngannou expressed feeling disrespected by the company going into his last outing with Ciryl Gane at UFC 270. ‘The Predator’ went into the fight with blown-out knees and only one fight remaining on his contract. He took a huge risk in attempting to fight out his contract as a loss would’ve resulted in him losing substantial leverage in negotiations.

Although Ngannou is not a free agent as of yet due to the championship clause, a new deal remains to be signed with the promotion.

Do you think Jon Jones will beat Stipe Miocic?