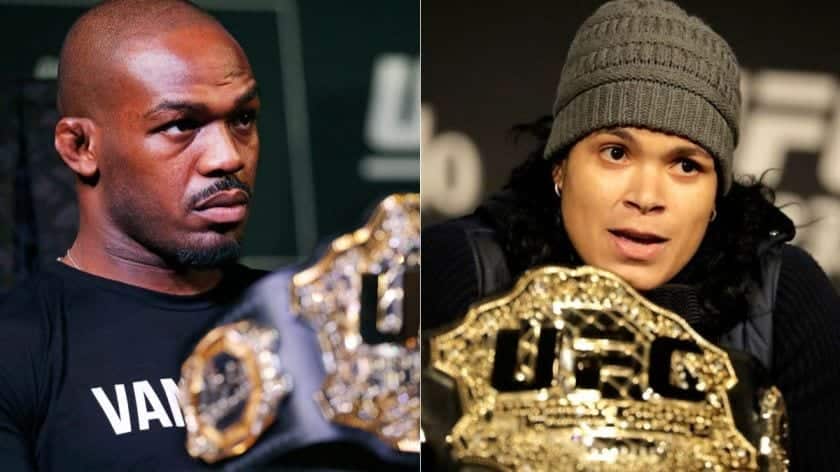 Former UFC Light Heavyweight champion Jon Jones has revealed that only one fighter comes a ‘close second’ to him in the MMA GOAT debate.

MMA Fans heavily debate the MMA GOAT topic and most fans agree that it’s either UFC Lightweight champion Khabib Nurmagomedov or Jones. However, the 33-year-old disagrees and has a message to any that thinks Khabib is in the GOAT conversation. ‘Bones’ also believes that the current Bantamweight and Featherweight champion Amanda Nunes is second in the conversation right after him.

Jones tweeted “If you consider your favorite fighter the best and he’s not on this list, slap yourself. Have a great week.”

It seems that Jones is taking shots at Khabib Nurmagomedov and Israel Adesanya who each have four title fights wins, while Jones has 14 wins and 1 no contest.

He then goes on to say that he believes Nunes is a “Close second, only halfway there. That’s a bad woman.”

The lioness returns to action on March 6 at UFC 259 when she defends her Featherweight belt against Megan Anderson, the event is expected to take place at the UFC Apex in Las Vegas. This will be her first outing since defeating Felicia Spencer via unanimous decision at UFC 250 to retain her Featherweight title.

As for Jones, he is finally expected to make his Heavyweight debut later this year and fight the winner of the UFC 260 main event between the champion Stipe Miocic and Francis Ngannou in their rematch. Jones has now been away from the octagon for more than a year with his last fight coming at UFC 247 where he beat Dominick Reyes by unanimous decision. Ever since then Jones has relinquished his Light Heavyweight belt to focus on a career in Heavyweight.

Who do you think is the MMA GOAT? Jon Jones, Amanda Nunes or somebody else?