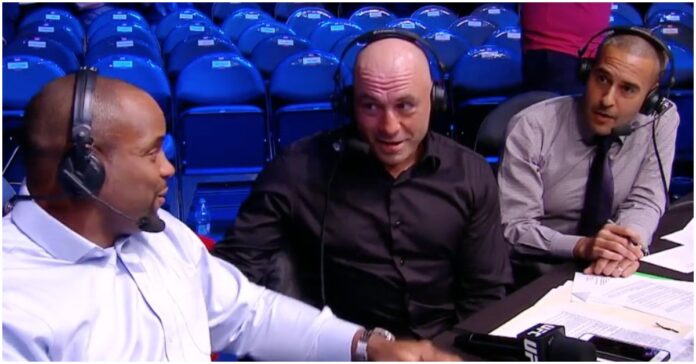 The much-anticipated UFC 271 pay-per-view event will see the reappearance of Joe Rogan within the commentary box.

It has been confirmed that veteran voice of the octagon, Jon Anik in addition to former two-division champ Daniel Cormier, will be alongside Rogan at Saturday’s UFC 271 in Houston, Texas.

This will be the fourth consecutive PPV event to feature, fan favourite, and one of the world’s best-known podcast hosts.

This all comes notwithstanding, Joe Rogan finding himself in the headlines for all the wrong reasons after he was accused of spreading controversial information about COVID-19 on his show, as well as issuing an apology video, after a video suffered of him repeatedly using a particular racial slur whilst on his podcast show.

How does UFC commentator Jon Anik, see the main-event playing out?

The promotions headliner of the event will see the middleweight rematch between Israel Adesanya (21-1 MMA) and Robert Whittaker (24-5 MMA). In a fight where commentator Jon Anik stated on the ‘Anik & Florian Podcast‘ that he believes that the fight will stay standing, despite Whittaker hinting at new gameplan for ‘The Last Stylebender’.

“I expect a better and more disciplined attempt from Whittaker… I do think that Whittaker will try and mix it up, but I wouldn’t be surprised to see if it ends up being a kickboxing match and an absolute war on the feet.”

Are you happy to hear Joe Rogan, Jon Anik and Daniel Cormier are on commentary duty at UFC 271?