LowKickMMA.com
Home MMA News Johny Hendricks Plans On Taking Out Everyone To Get A Title Shot 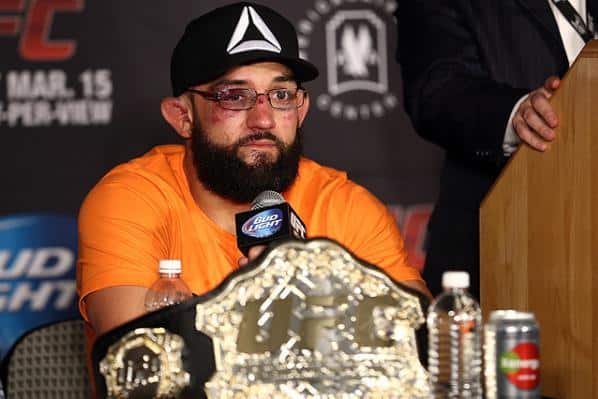 No. 1-ranked welterweight and former champion Johny “Big Rigg” Hendricks sat cage side at UFC 189, where current champion Robbie Lawler defended his title against Rory MacDonald, with the idea that he was next in line for a shot at welterweight gold.

However, it is now clear that Hendricks has been leap frogged as the UFC has announced that Lawler will meet No. 4-ranked Carlos Condit at UFC 194, while Hendricks will meet No. 3-ranked Tyron Woodley at UFC 192.

Speaking with Sherdog recently, “Bigg Rigg” admits that it’s not the first time that he’s been passed up, and also claimed that he’s going to start taking the Donald Cerrone approach to things. Cerrone has won eight-straight fights, taking out contender after contender before finally being gifted a lightweight title shot:

“It’s not the first time I’ve been passed up. It’s not the first time I should’ve been fighting somebody, and it doesn’t happen. You take it on the chin. You laugh about it. You say, ‘Whatever.’ You go out there and you beat somebody else,” Hendricks said. “I keep telling everybody I’m gonna start doing it the ‘Cowboy’ way, like Donald Cerrone, and just beat everybody and go, ‘There is no other No. 1 contender except for me.’ If that’s what I have to do that’s what I have to do.”

Hendricks has won two out of his last three bouts, with his only loss being a split-decision to Lawler, and his most recent fight being a dominant win over another top-five 170-pounder in Matt Brown. One would have to think that Hendricks vs. Woodley would garner the next title challenger, but “Bigg Rigg” isn’t so sure, noting that he will continue to beat everyone until he’s where he wants to be:

Hendricks also doesn’t exactly believe that Condit is deserving of a title shot right now. Hendricks claims that his last fights have been against top contenders, while “The Natural Born Killer” recently returned from a long injury layoff to beat Thiago Alves, who isn’t currently a top-five fighter:

“Don’t get me wrong, I say this a lot: You’re only as good as your last fight,” Hendricks said. “The only thing is, my last five or six fights have all been top 5 or better. Carlos Condit came off of a year and he fights No. 12 [in the UFC.com rankings]. Thiago Alves is a tough dude, he is, but he’s not a top 5 dude.”

Ironically both Hendricks and Woodley have beaten Condit, and “Big Rigg” knows he has a tough challenge in front of him, but he also claims that he has been rounding out his skill set and will look much sharper come October:

“He’s ranked No. 3 for a reason. He’s got a heavy right hand. He’s beaten some very good guys. Whenever you throw a guy out there that can take you down, that’s where things start to get interesting. Because not only can he knock you out, but he can also take you down,” Hendricks said. “That’s where I’ve been working on my skills and getting that power and all these things back. People [are going] start to relearn why they are scared of my hands. My combinations, my kicks, everything’s looking good. But we focused so much on that, it’s time to focus back on power — hitting somebody and seeing if they can withstand that punch. That’s the threat that he also has. Whenever you’re going against someone like that you’ve got to know: hit them and capitalize.”

At the end of the day, Hendricks doesn’t understand the UFC’s thinking process, but the Texas native is ready to prove once again why he is the No. 1-contender:

“You try to wrap your head around everybody’s way of thinking, but you can’t sometimes,” Hendricks said. “Sometimes you’ve got to take a step back and say, ‘It didn’t work out the way I wanted it.’ “Guess what? I can go back in there, get another win. I can showcase why I’m No. 1, and why they shouldn’t have given a No. 4 ranked [fighter a title shot] over a No. 1 ranked.”

Should Hendricks have been given the title shot?