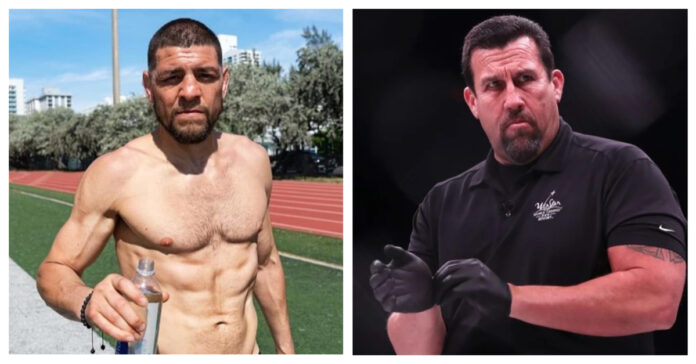 Former UFC referee ‘Big’ John McCarthy has recently come out and suggested that UFC veteran and fan favorite, Nick Diaz (26-10 MMA) should be given a title shot in his next bout.

The 59-year-old is eager to see Diaz back in the octagon, with the California native still yet to fight the last fight on his contract. Whilst appearing on the ‘Weighing In’ podcast with Josh Thomson, McCarthy depicted what he believes the UFC should do next for Nick Diaz.

Although McCarthy would love to see Nick Diaz in a UFC title fight, McCarthy understands the reality of that challenge, going up against the Pound for Pound best fighter in the world, Kamaru Usman.

“Kamaru would stand with him until he starts getting lit up. Then he’s going to go and use his wrestling, which he should, I’m not saying he shouldn’t… I don’t think that Kamaru would be standing up against Nick that long.” (Transcribed by BJPENN.com)

Nick Diaz’s last outing in the UFC was in September 2021, against a former opponent and UFC veteran Robbie Lawler at UFC 266, where Lawler was able to come out with the TKO victory.

It is still unsure when or if we will see Nick Diaz fight again in the UFC, but if MMA fans manage to see him fight one last time, a title fight doesn’t sound too bad.

Do you agree with John McCarthy, would you like to see Jorge Masvidal vs Nick Diaz for the BMF title?