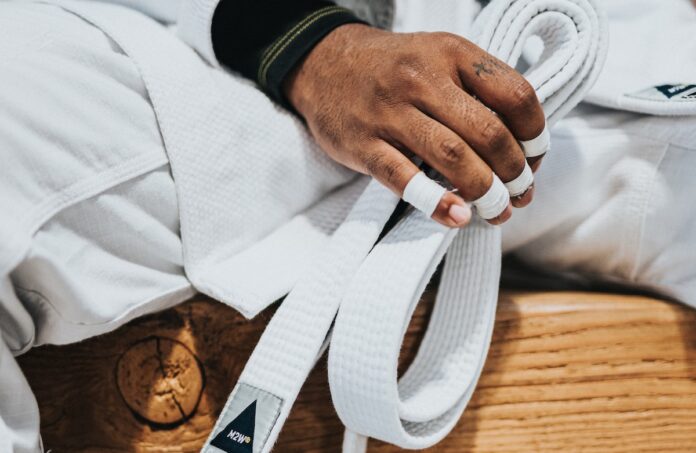 Those that follow combat sports like MMA are probably already informed about the Jiu Jitsu belt system. There are many top fighters that have black belts in Karate and went through the karate belt order.

Here is a complete breakdown of the belt system used within Karate. Going through everything from how the karate belt order was developed and what each rank signifies.

We’ll also detail how long it takes to earn a black belt in Karate along with the karate belt order.

How was the Karate belt system?

The person who originally created the belt system within martial arts was Judo founder Jigoro Kano. Master Kano got the idea for a ranking system from the game of chess.

Separating the skill levels by colored belts with white being a beginner and black being the expert level. It also allowed students to see their progress and encouraged them to keep working toward their black belt.

When Karate co-founder Gichin Funakoshi was developing Karate in the early 1900s, he liked Kano’s idea of a belt system. So much so that he developed one for Karate.

Funakoshi introduced the Karate belt order system in 1924 and the martial art quickly skyrocketed in popularity. It was taught throughout Japanese schools along with Judo and later spread around the world.

All thanks to the addition of a belt system.

There are actually two different karate belt orders within the martial art of Karate. The colored belts are called kyū and the black belt systems and ranking are called dans.

Kyū ranks are the first colored belts that a Karate student works their way through to get to black belt. A “mudansha” or new student without a rank starts at white belt and goes through the 8 colored belts.

Those colored belts include:

In Karate the black belt ranks are called dans and each rank has its own name. Black belt recipients are called “yudanshas” and each of the 10 ranks they go through have a different name.

There is also one higher rank than the black belt ranks and that is a red belt. Although it is almost impossible to reach the level of red belt.

Just like in Jiu Jitsu, a Karate red belt is generally reserved for the grand masters of the martial art. To earn a red belt in Karate, you must dedicate your entire life to the martial arts.

You’ll most likely never achieve this feat, but it shouldn’t stop you from learning Karate if you want to.

Symbolism of the Kyū ranks

(NOTICE!! The ranks below are the ranks designated by the World Karate Federation. Different styles of Karate like Kyokushin do not go by these ranks.)

A white belt symbolizes light, which means a student is just beginning their journey through Karate. They’re brand new just like a newborn baby and are full of potential.

The yellow belt rank signifies the light of the sun. Now that you have begun your Karate journey, you are now more open to learning new techniques.

The yellow belt was a ray of sunlight and the orange belt signifies the sunlight spreading across the earth. You’re starting to grow and expand your knowledge about the martial art.

After the orange belt you get promoted to the green belt rank. After receiving light, your roots are now taking hold in the ground. Meaning that you are continuing to progress and learn new techniques.

Blue belt symbolizes that you are a plant starting to grow up to the sky. You not only know many of the techniques, but start to develop a deeper understanding of them.

The rank of purple belt is the jump from lower belts to the upper belts much like in Jiu Jitsu. Reaching this rank symbolizes that you are serious about your training and advancing to the next level.

A brown belt symbolizes that you have grown into a full fledged Karate practitioner. Almost to a black belt, but still needs some more refining to reach the next rank.

A red belt is the second to last of the kyū ranks. At this level, you have acquired enough skills and shown that you are able to teach lower belts different techniques.

Then finally after going through the first 7 belts, you finally reach the level of black belt. A Karate black belt signifies that you have put in the time and have mastered the skills of the martial art.

How long does it take to reach each rank?

In total, the average time it takes to reach the 1st Dan(black belt) in Karate is around 5 years. Each school advances their students differently, but 5 years is a pretty common time frame. Here is a breakdown of the average time spent at each belt.

Time requirements for the Dans(black belts)

Earning a higher dan rank in Karate takes even longer than the previous dan rank. Here is a time from for each of the 10 dan ranks.

Who regulates the Karate belt ranks ?

The majority of Karate schools follow the belt regulations of the World Karate Federation(WKF), who also certifies black belts.

In order to compete at WKF sanctioned tournaments, all black belts must be WKF certified. This is just like how the IBJJF operates within Jiu Jitsu.

To go through the Kyū ranks in Karate, you must go through a belt test at each level to progress through the karate belt order. For the tests, each student must perform certain techniques in front of their instructor.

As you progress, the difficulty level of each test gets harder. Usually students will have to perform their skills in a series of live sparring and self defense scenarios.

To earn a black belt is traditionally an all day affair. Potential blak belt candidates have to go through a grueling day of training.

This includes strength and conditioning in the morning, followed by techniques presentations, and numerous rounds of live sparring.

Those students that make it through this test are awarded their black belts in Karate.