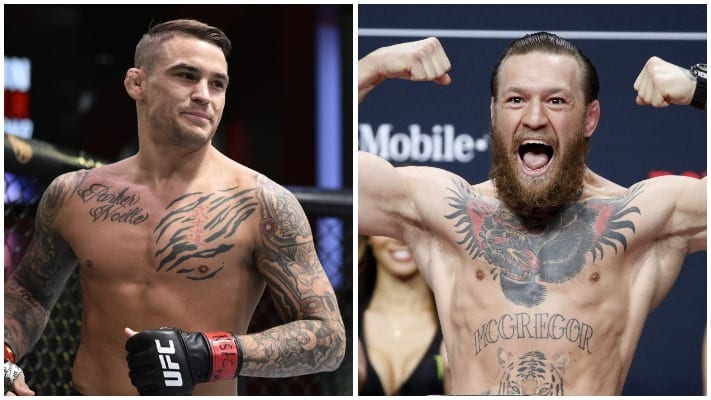 As far as John Kavanagh is concerned, Conor McGregor should be fighting Dustin Poirier for the lightweight title.

And despite Khabib Nurmagomedov’s retirement at UFC 254 in October, McGregor vs. Poirier won’t be for an interim belt, let alone the seemingly vacant lightweight strap.

That’s because UFC president Dana White is still hoping to persuade Nurmagomedov out of retirement when they meet next month in Abu Dhabi. Should White be successful, Nurmagomedov — who currently holds 29 wins — will look to go 30-0 before likely retiring for good.

In that scenario, the lightweight title would be vacant again which is why McGregor’s head coach in Kavanagh wonders why a title isn’t on the line at UFC 257.

“I don’t really get why this one isn’t for the title, if I’m being 100 percent honest.” Kavanagh told The Mac Life (via MMA Fighting). “Maybe it’s Dana, this is a little carrot towards Khabib ‘do you really want this guy [to have it?].’ I don’t know. I know there’s stuff, the games that go on, I don’t involve myself in it.

“But this to me feels like it’s for the belt. But I guess at the very least the winner of this will be offered a title fight but who would that be against? It’s a bit of a strange scene we have in front of us, which makes it interesting.”

As for Nurmagomedov facing McGregor again to potentially go to 30-0? Kavanagh would love to see it as he believes they are the two best lightweights in the world.

That said, it’s all down to Nurmagomedov who has repeatedly expressed no interest in facing the Irishman again. Not to mention the fact that almost everyone in the combat sports world believes he’s a man of his word when it comes to retirement.

“I think Conor and Khabib are the two best lightweights,” Kavanagh said. “It would be for me from a coaching perspective, phenomenal to see that contest again. Will he come back? You’re asking the wrong guy. That’s Khabib.

“He seems the type of guy if he says something, that’s it, but like Dana has hinted, there might be some wiggle room in those promises made. Time will tell.”

Do you agree with Kavanagh that a belt should be on the line?