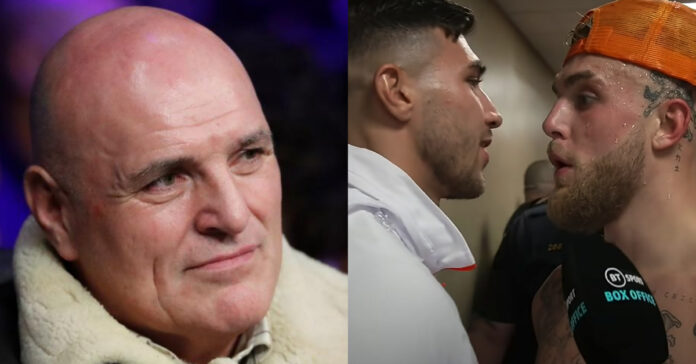 John Fury trashed Jake Paul after his win over Anderson Silva and claimed his son Tommy would knock him out with one punch.

This past Saturday, ‘The Problem Child’ faced Silva in a boxing match at the Desert Diamond Arena in Glendale, Arizona. He earned an impressive unanimous decision win over the MMA icon to extend his undefeated run as a professional to six.

Before Paul got paired up with Silva, he was scheduled to fight Tommy Fury in what many believed would be a proper boxing challenge for the social media influencer-turned-boxer.

“If any of my sons was fifty years old and doing that, I’d say ‘Listen, have a day off, give your head a wobble,’” Fury Sr. said (transcribed by MMA Mania). “‘Alls you’re going to do is make a fool of yourself and entertainment for other people. You’re making the other man that’s useless look good.’ Jake Paul can’t fight. [Tommy] will knock Jake Paul out with one punch. And I’ll say it now on camera: Jake Paul will get knocked out with the first right hand that he throws, and I’ll put money on it.”

The outspoken John Fury further praised Tommy for competing against actual boxers, unlike Paul, whom he bashed for only taking on mixed martial artists.

“This man [Tommy] is fighting here, at least he’s a proper fighter,” he said. “He trains as a boxer. All he’s fighting, he’s had seven pro fights against proper opposition. Not some hand-picked geriatric that needs a Zimmer frame [walker] to get in the ring.”

Tommy had expressed a desire to fight Paul if he beat Silva but no concrete developments have come yet.