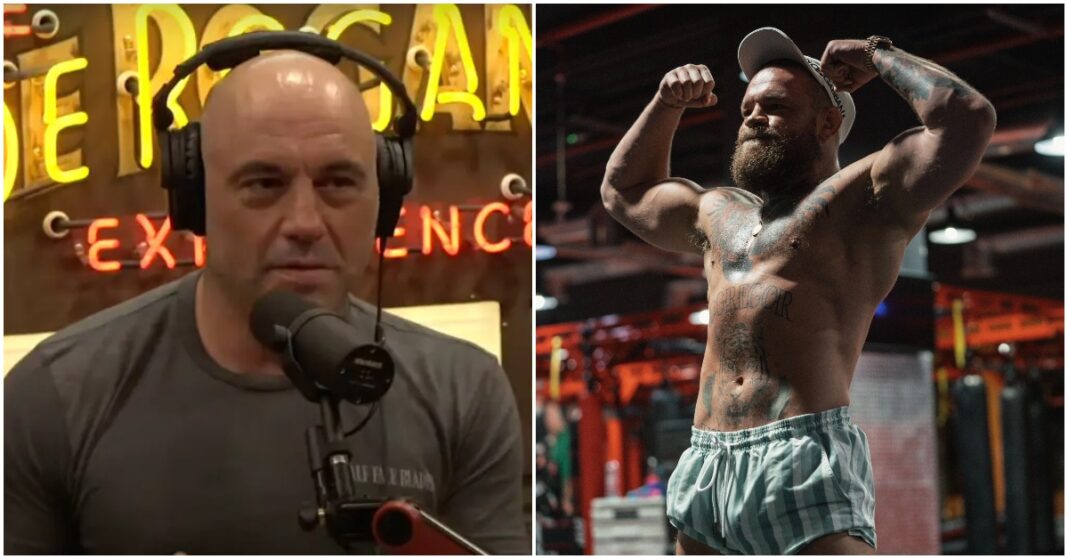 The Irishman is currently healing up after fracturing his tibia and fibula back in July at UFC 264. Amazingly, during his time in rehabilitation, McGregor has managed to bulk up to 190lbs and he recently took to social media to reveal his new frame.

Rogan expects USADA will be taking an interest in McGregor’s recent gains but the UFC commentator and popular podcaster thinks the images circulating online may not be representative of what ‘Notorious’ actually looks like right now.

“That’s him now, super jacked,” Rogan said during a recent episode of JRE. USADA is going to take a visit to him real soon. It’s a weird picture. He’s definitely jacked but it looks to me he’s in the middle of lifting. If you see a guys body in the middle of lifting it’s a little deceptive. He still looks great.” (Transcribed by Essentially Sports)

During the same podcast, Rogan talked up McGregor’s “freakish” punch power and reminisced about his 13-second featherweight title win over Jose Aldo.

“He’s just got that freakish punch,” Rogan said. “I mean that’s just genius, he had a little bit of a cut over his right eyebrow from that punch. Look how genius this is, that’s so genius. You know what’s even more genius? He worked on the exact same thing and he mimicked what he was going to do, in the green room. There’s a video of him, Conor, Conor pretending to be Aldo and then him showing what he’s going to do and counter. He does the exact same move in the green room, knowing in the dressing room, knowing that’s going to be the fight.”

Do you agree with Joe Rogan? Will USADA be taking an interest in Conor McGregor’s recent weight gain?