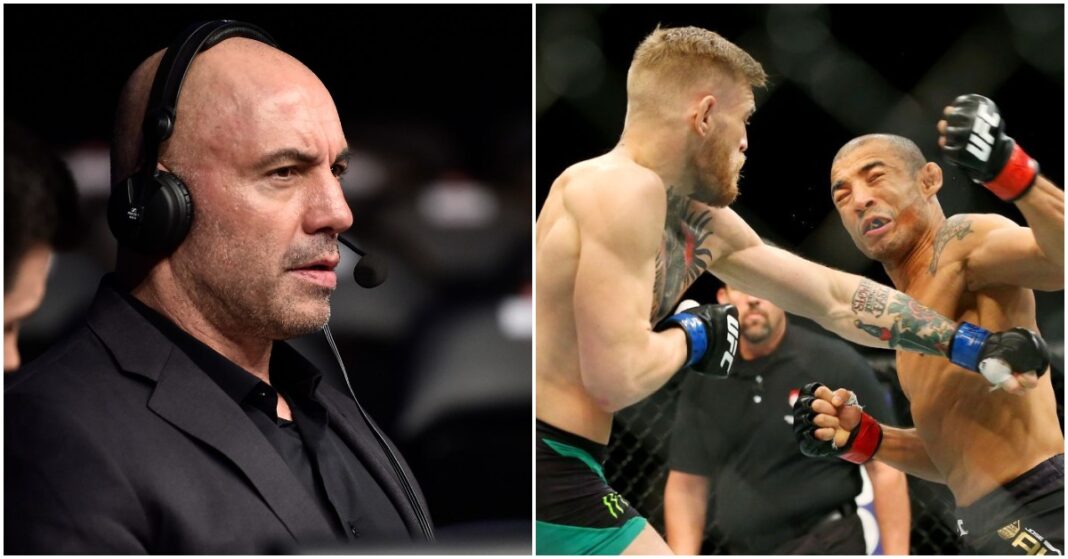 Joe Rogan brought up the “freakish” power of the Irish superstar Conor McGregor, most notably talking about the KO of Jose Aldo in 13 seconds back in 2015.

“He’s just got that freakish punch,” Rogan said. “I mean that’s just genius, he had a little bit of a cut over his right eyebrow from that punch. Look how genius this is, that’s so genius. You know what’s even more genius? He worked on the exact same thing and he mimicked what he was going to do, in the green room. There’s a video of him, Conor, Conor pretending to be Aldo and then him showing what he’s going to do and counter. He does the exact same move in the green room, knowing in the dressing room, knowing that’s going to be the fight.” (Transcribed by Sportskeeda)

Rogan reflected on the KO and his recent muscle bulk in the most recent episode of the Joe Rogan Experience with comedians Tony Hinchcliffe and Ari Shaffir.

McGregor has made headlines again recently calling for a matchup with another Brazilian champion, this time Lightweight king Charles Oliveira, even calling for the fight to be held in the champs territory in Brazil.

The Oliveira-McGregor matchup in Brazil would obviously be a massive draw and fight to make but one has to wonder how logical it would be considering Justin Gaethje is next in line after his epic win over Michael Chandler just last month. The Beniel Dariush-Islam Makhachev matchup in February is also likely to get the title shot vs the winner of Oliviera-Gaethje.

One has to wonder how likely the McGregor fight would happen for Charles Oliveira. It certainly would create a lot of chaos for the rightful Lightweight contenders.

Do you agree with Joe Rogan’s take on Conor McGregor‘s punch power?