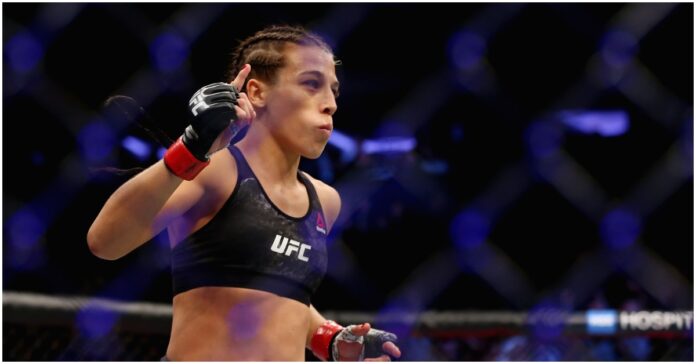 Joanna Jedrzejczyk has expressed her desire to get back into the octagon in a recent interview with SCMP MMA. Jedrzejczyk has not set foot inside an octagon since her all-out war with Zhang Weili for the Strawweight belt, in which she would fall just short in back in March 2020.

Never to be put off, Joanna Jedrzejcyk is determined to get back to it to prove herself as still being one of the best and even has a potential opponent in mind in the form of a rematch with Carla Esparza.

“It would be an interesting fight; we have a good fighting history. She’s waiting for the title shot – I don’t know what’s going to happen next. She might get the title shot; she might not get it because Dana (White) is saying something totally different than Mick (Maynard). But I don’t know, I would love to fight her and if she wants to get the title shot, I can fight her.”

Joanna Jedrzejczyk has only lost to fighters who currently hold or have held a championship within the UFC with all her shortcomings occurring in title fights. Since her last fight against Weili, the strawweight belt has changed hands with Rose Namajunas successfully acquiring and then defending her belt against Weili. Given her previous fights with ‘Thug Rose’ it would be understandable that the new champ would be Jedrzejcyzk’s first target. However, this wasn’t the case when asked about her return and potential trilogy with Rose.

“Yes and no, I know how to do business as well and I understand UFC and Dana promised me after my last fight, but I understand Rose’s position. She’s the champ and she can decide who she wants to fight next and when. I feel like I want to be back to the Octagon March-April so if the champ is not going to be ready, if she’s not willing to fight me, I will take another fight because I just want to be back. I don’t want to sit here and wait another six, eight, 12 months – it’s not that UFC made the pressure on me, but I just want to do what’s good and best for me.” (Transcribed by BJPENN.com)

Who do you want to see Joanna Jedrzejczyk fight next?