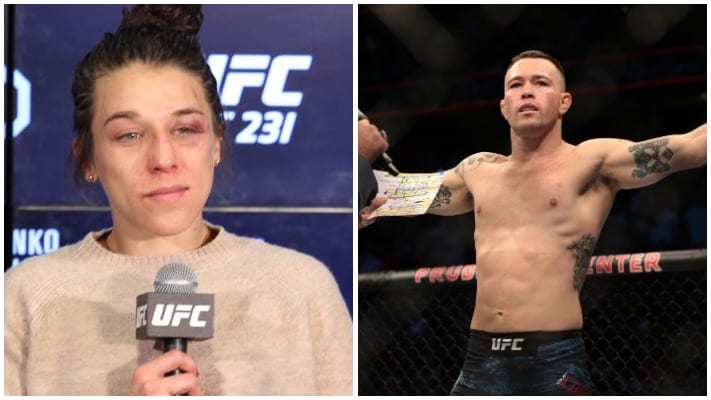 Covington recently got himself on the bad side of fellow ATT members Jorge Masvidal and Dustin Poirier with comments he made. “Chaos” called his former roommate and best friend Masvidal a number of things from jealous to a journeyman. As for Poirier, Covington degraded him by predicting that Khabib Nurmagomedov would easily defeat him at UFC 242 last month.

It got to the point where many feared an altercation could happen if they were in the gym at the same time. Covington also stated he may have to leave ATT if things continued.

As of now, nothing has happened. But a fellow ATT member in Jedrzejczyk is not impressed with the former interim welterweight champion:

”You shouldn’t sh*t in your gym,” Jedrzejczyk told theScore. “What (Covington) has done, it’s like pretty shady, you know? I really do not respect that… I really don’t like it because we are all teammates. It was really not nice because even if I really like Khabib … I need to and I want to stick to my people and support them.

“I saw how hard Dustin Poirier was training before the fight. The gym is very big…. We all are different, from different cultures, different countries, we all behave differently, we all have (a) different sense of humor. But the thing is you should support your teammates, it doesn’t matter if you like them or not. We represent one team, we represent the same colors, so we should support each other as much as we can.”

Do you agree with Jedrzejczyk?