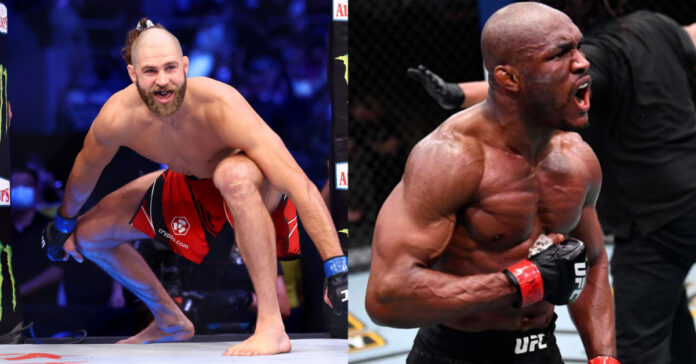 UFC light-heavyweight champion Jiri Prochazka has reacted to welterweight champion Kamaru Usman’s aspirations of moving up to 205lbs for a shot at the title.

With Usman and middleweight champion Israel Adesanya being close friends, this has ruled out any chance of ‘The Nigerian Nightmare’ moving up to challenge for double champ status, with both men saying that the fight would never happen.

This hasn’t stopped Usman from dreaming of capturing a second belt. However, this would mean skipping middleweight and going all the way to light-heavyweight, 35lbs above his natural weight class.

The current 205lbs champion, Jiri Prochazka, sat down with ‘The Schmo’ to discuss what he thought of ‘The Nigerian Nightmare’ potentially moving up to his division.

“We met on the fight night and I saw him, he’s a great fighter, respect to him,” Prochazka began “If he wants to challenge the guys from the light heavyweight, it will not be so easy as you think.

“First, I want to defend the title, then I will be focused for this fight. I’m not thinking about that right now… Maybe. I like to challenge myself. This is a good challenge, it’s another weight class, I don’t believe in weight classes because every time, it is about the strongest man on the planet. And that’s what I’m looking for.”

It is hard to be the current light-heavyweight champion and not have to receive questions and comparisons to the division’s greatest ever title holder, Jon Jones.

Although many have disdain for Jones, Prochazka clearly has nothing but respect for the two-time UFC champion. “For me, I have a huge respect for all my career, for Jon Jones,” Prochazka added. “I’m looking forward to his fight at heavyweight.

“It’s too early to talk about me challenging guys in other weight classes because I have to defend the title. Without defending the title, you are not a true champion. So that’s what I’m looking for right now. I will challenge myself after that with all these weight classes and fights.” (H/T MiddleEasy)

What would you think of Jiri Prochazka Vs. Kamaru Usman?