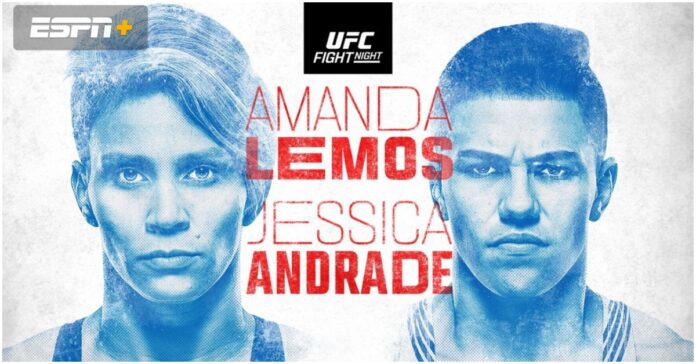 Join LowKickMMA as we preview, predict, and hopefully win some money betting on UFC Fight Night: Andrade vs. Lemos.

In the main event spot, former strawweight champion Jessica Andrade takes on rising contender Amanda Lemos. These two fighters may well be the hardest hitters in the entire division, both possessing a natural power not often associated with strawweights.

The main difference between them is experience. Andrade holds a record of 22-9, whilst Lemos sits at 11-1-1, despite being four years older than her opponent. Admitedly, Lemos does have a height and reach advantage, but the consistently high quality level of competition that Andrade has been facing will likely cancel this out.

We will be taking Andrade to win at her ML for this fight, where she currently sits at around -190 for most betting online sites.

Maycee Barber has not quite lived up to the massive prospect label she was given upon signing for the UFC. Her eight fight winning streak was snapped in 2020, as Roxanne Modefferi caused a massive upset, defeating ‘The Future’ via unanimous decision at UFC 246. A follow up loss to Alexa Grasso further quelled Barber’s hype train. Even her most recent win over Miranda Maverick was shrouded in controversy, with many disputing the judges scorecards.

However, with this all being said, Maycee Barber is still an extremely talented fighter that has likely benefited hugely from having to overcome such adversity. This weekend she takes on Monatan De La Rosa, a talented grappler with lethal submission skills.

We are going to be taking Baber’s ML, at around -190. She will have a massive advantage on the feet, and only gets stronger the longer the fight plays out. However, should you wish to hedge, De La Rosa’s submission prop at around +700 could well be worth a sprinkle, with Barber’s weakest area unedeibly being her ground game.

This flyweight scrap promises fireworks between two of the most dynamic fighters in the division. Similar to Barber, Manel Kape has not quite lived up to the hype. However, his past two fights have been an emphatic return to form, with a flying knee KO over Ode Osbourne, and a vicious round one stoppage again Zhalgus Zhumagulov.

Su Mudaerji is a talent, there’s no two ways about it. But so is Kape, and his striking is of such a high level that even a fighter Mudaerji’s level will struggle to keep up with him.

We are going with Kape’s ML, which stands at around -150. For prop hunters, Kape by KO is currently around +250 on most online betting sites, which could be worth a stab.

There are also several heavy favorites on this card that are likely worth parlaying together. Alexandr Romanov take on Chase Sherman, who is stepping up on short notice. Romanov is a heavy favorite with reason, as his run with the UFC has entirely dominant so far. He becomes the first paraly piece.

Next is Tyson Pedro, who takes on Ike Villaneuva. Pedro has been out for some time, but he returns to face an opponent who has struggled to consistently compete against UFC level opposition. Pedro may be on a two fight losing streak, but he still holds win over Paul Craig and Khalil Rountree. We will take Pedro as the second parlay option.

In the opening fight of the night, Irish prospect Dean Barry will face off against Mike Jackson. This one is simple enough, Barry is a 4-1 knockout artist who has finished all four of his victories, whilst Jackson has a pro record of 0-1-1. Fans may remember Jackson from his win over CM Punk, that was later overturned to a No Contest. This is clearly a fight designed to make Barry look good, and we fully expect him to do exactly that. Barry by KO becomes our third and final parlay piece.

If you looking for the best place for online UK betting, Mr Bet is the place to go.

What are your best bets for UFC Fight Night: Andrade vs. Lemos?