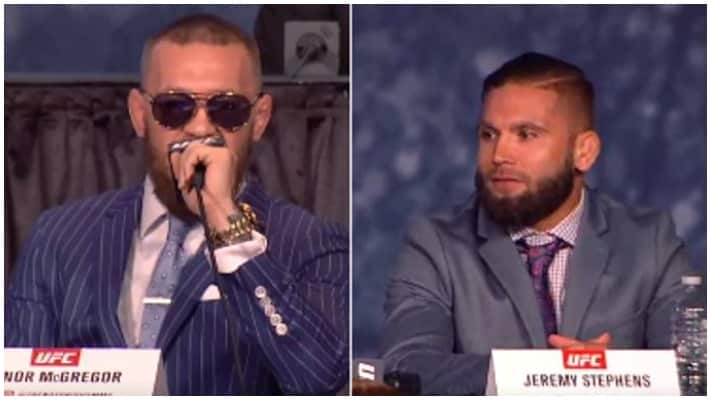 Jeremy Stephens may be on a long losing streak but that hasn’t affected his confidence at all.

‘Lil Heathen’ was tapped out in just over a minute this past weekend when he stepped back up to lightweight to take on Mateusz Gamrot at UFC Vegas 32.

Stephens beat Josh Emmett back in February 2018 before this disappointing turn in form saw him suffer five consecutive losses, a run of poor form that would usually lead to a fighter begin cut by the UFC.

Stephens has a stacked record with plenty of high-profile wins over the likes of Rafael Dos Anjos, Sam Stout, Renan Barao and Gilbert Melendez.

He is perhaps most famous for being the guy Conor McGregor roasted at a UFC press conference in 2016. Stephens presented himself as a potential opponent for McGregor during the UFC 205 presser only for the Irishman to loudly ask, “who the fook is that guy?”

Stephens thinks now is the time to settle his beef with McGregor.

“Just thinking… the true fight to make is me and Connor,” Stephens wrote on social media. “He broke his ankle, someone dove for my ankle. We both like to fight and keep it standing. Both power both different. Plus I like to calve kick and have wide range of KO’s.”

As the MMA veteran mentioned, McGregor is currently injured after breaking his tibia and fibula at UFC 264. ‘Notorious’ was looking to avenge his UFC 257 defeat to Dustin Poirier but ended up suffering a horrific injury at the end of round one. The former dual weight champion is intent on fighting ‘The Diamond’ for the fourth time when he is fully healed up, although that process is expected to take more than a year to play out.

Do you want to see Jeremy Stephens vs. Conor McGregor?