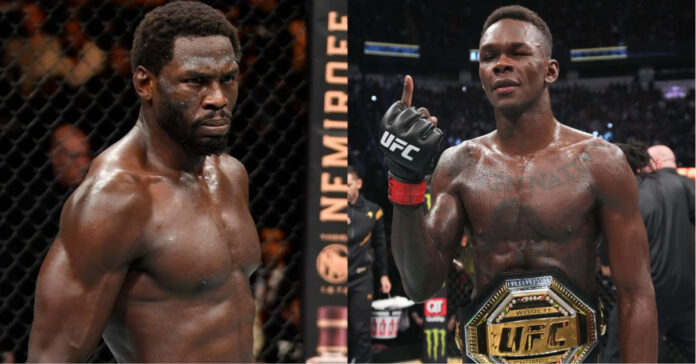 This weekend, Israel Adesanya will attempt to make his fifth title middleweight defense, but his opponent, Jared Cannonier, is planning on ruining the party and getting it done early.

Since his arrival in the UFC, Adesanya appeared to be destined for greatness special, and he since lived up to expectations. Capturing UFC gold in just over a year past his debut, ‘The Last Stylebender’ has defeated everyone he has fought at middleweight and is now beginning to lap the division.

Almost anyone who will attempt to snatch Adesanya’s belt will be a significant underdog and his next opponent, Jared Cannonier is no different. The ‘Killa Gorilla’ earned his way to UFC gold after two impressive wins over Kelvin Gastelum and Derek Brunson and is the holder of a 5-1 middleweight record.

Cannonier knows the task that is ahead of him, but the American is planning on giving it his all to get it done.

“If there has to be that (feeling-out period), it’s probably going to be the first one and a half, maybe two minutes of digesting some stuff,” Cannonier said to DAZN. “And then there’s going to be action and I’ll have to continue digesting after that.”

“To be honest, I don’t want to have that feeling-out moment,” Cannonier says after thinking it over some more. “I want to get in there and go to work, put him away quick, fast and easy.”

“I’m trying to end this thing in the first. As soon as the ref says go, the goal is to put him away, to finish and incapacitate my opponent and go home.”

Although the pair are set to do battle in just a few days, both seem to have respect for one another and the build up has involved no trash talk. In fact, Cannonier had nothing but good things to say about the champion and admitted he would need to be perfect in order to beat him.

“He’s ran through some of the division and rightfully so garnered a lot of notoriety,” Jared Cannonier says. “He’s got the belt, a real good contract, all that good stuff so good for him.

“I have to be a 10,” he adds. “I just gotta be the best version of myself. Everything has to be clicking. It’s not just one thing that’s going to get it done. It’s got to be precision, power, speed, position … all that stuff.”

Who will win, Jared Cannonier or Israel Adesanya?