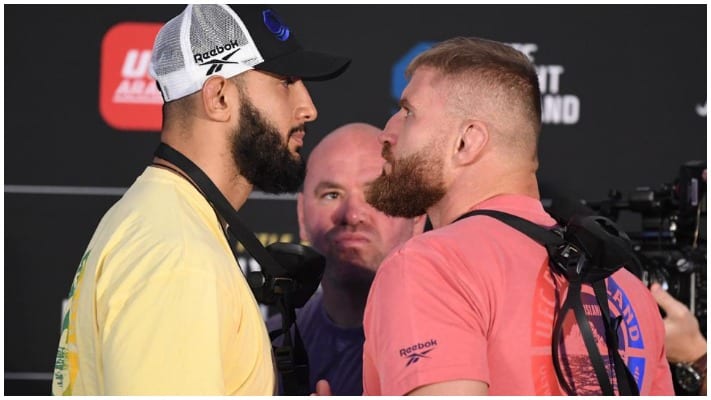 In the UFC 253 co-main event we will crown a new light-heavyweight champion. Dominick Reyes and Jan Blachowicz will throw down for the title recently vacated by long-time 205lb king Jon Jones. Who’ll become champion tonight? Let’s find out…

Round 1: Both men exchange leg kicks at the start of round one. Dominick Reyes lands the first significant strike of the fight. A straight right-hand knocks Jan Blachowicz back onto his heels. The Polish puncher ends a nice combo with a sharp kick to the body. Blachowicz lands a leg kick. Reyes counters with a left hand down the middle. Blachowicz is plodding forward. Reyes is on his heels moving around. Blachowicz gets around the guard with a shot that gets a reaction from his opponent. Reyes tries a body kick at the end of round one but Blachowicz catches it as the horn sounds.

Round 2: Reyes comes out much more aggressive at the start of round two. Blachowicz steams forward with a flurry of punches to get his opponent moving backwards once again. Reyes pokes the body with a kick. He misses wildly with a combo. Blachowicz throws some punches of his own which appear to have a much better success rate. They clash again and the Polish fighter comes out on top lands two short hooks on the inside. Reyes just seems to be unable to find the target so far. Just as I say that he lands a nice body kick then follows up with another kick to the leg of his opponent. Blachowiz sneaks a right hand through then goes after Reyes. They start swinging! Blachowicz gets the better of the standoff. Reyes is wobbling all over the place. The Polish puncher follows up and knocks his opponent to the mat. Blachowicz swarms for the finish. He is the new UFC light-heavyweight champion!