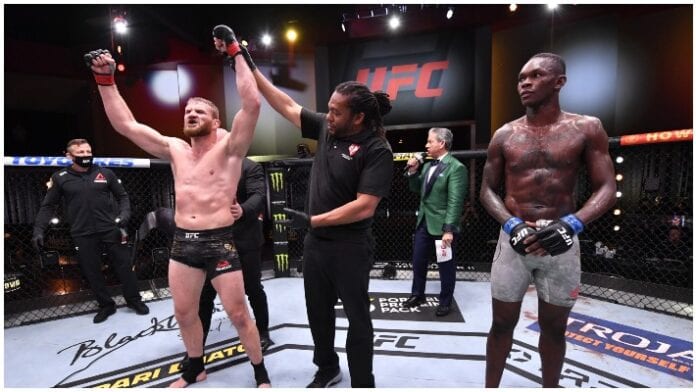 Blachowicz defended his light heavyweight title after a unanimous decision win over Israel Adesanya in the UFC 259 headliner earlier this month.

By the end of the fifth round, it seemed clear to most who the winner would be. However, there were some doubts mainly because of what many observers called a biased commentary team that featured Jon Anik, Joe Rogan and Daniel Cormier.

Cormier has since defended those claims.

Bachowicz hasn’t seen the fight fully so he can’t give a proper assessment of the commentary. That said, he has heard enough about how it was allegedly biased.

“They don’t see me in this fight, they just see Israel,” Blachowicz told MMA Fighting. “But I don’t know, I don’t care. Maybe they are friends and that’s why. What can I do? Nothing. But anyway, that was not a problem. It is true, I haven’t watched the fight yet.

“… I don’t care. He [Cormier] do what he do, he has to live with that, not me. I am just happy. I defend my belt. I am and still the champion. So everything good can happen right now. Nothing can change my happiness inside me. I don’t care.”

Blachowicz upset the odds when he came out on top against Adesanya who will now return to the middleweight division.

But despite Adesanya falling short of his goal of becoming two-division champion, the Pole is not ruling out a rematch — provided the middleweight king gets a win in the division first.

“I think if he would come back to our division or stay in this division, of course the rematch may be in the future but first of all he needs to win against someone from top 10 and then maybe the rematch,” Blachowicz added. “Of course, he’s got everything to be in this division.”

What do you think of Blachowicz’s comments?